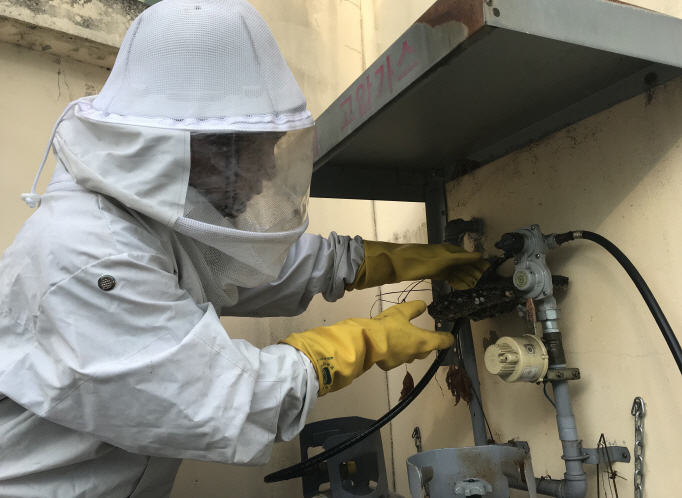 The National Fire Agency said that only some 80,000 cases concerning bee hives were reported during August and September, a 13 percent drop (12,955 cases) from last year. (image: Gwangju Nambu Fire Station)

Experts assume that hives were destroyed by the notorious heat wave that hit South Korea in August.

The National Fire Agency said on Monday that only some 80,000 cases concerning bee hives were reported during August and September, a 13 percent drop (12,955 cases) from last year.

Choi Mun-bo, a professor at Kyungbuk University, pointed to the record-breaking heat wave that hit the Korean peninsula in August as a factor leading to the decreased number of bee hive reports.

Decreased outdoor activity due to severe heat is likely to be another factor contributing to the fall in reports.

The number of deaths from bee stings during this period, however, amounted to seven cases, which was very similar to last year’s eight deaths.

The National Fire Agency said that large hornets that build underground hives, like the Asian giant hornet, were most likely able to avoid heat and maintain their numbers.

The agency argued that these hornets are probably the ones to blame for the deaths incurred during grave-mowing rituals common for South Koreans during Chuseok, Korean Thanksgiving.

The agency added that people should keep an eye out for bees in October, as hornets are typically still active. Hornets may respond aggressively to dark colors and fur since bears and badgers are their natural enemies.

Hikers are therefore advised to wear light-colored clothes and broad-brimmed hats for safety. In case of a hornet attack, it is advised to quickly flee to a safe area more than 20 meters away.

Choi Min-cheol, chief of emergency safety at the National Fire Agency, asked Koreans to stay cautious of bee stings when climbing mountains or mowing grass, adding that two people were killed by stings in October of last year.