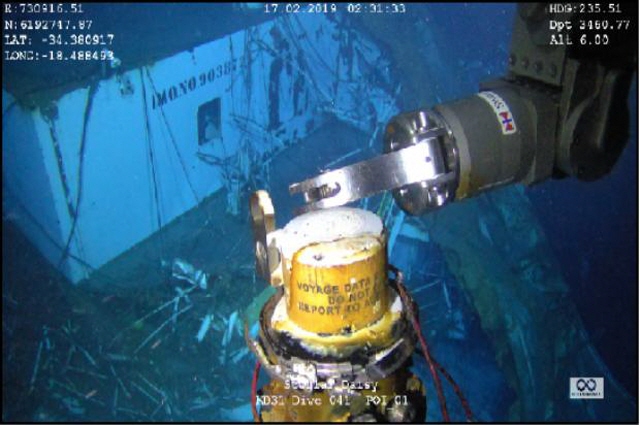 A voyage data recorder of the sunken South Korean bulk carrier Stellar Daisy being retrieved on Feb. 17, 2019. (image: Ministry of Oceans and Fisheries)

The discovery on Sunday morning (local time) came three days after the search ship, Seabed Constructor, arrived at the scene of the sinking and launched its operations employing four autonomous underwater vehicles.

The VDR, billed as a black box of a vessel, may carry information key to verifying the cause of the disaster, such as the location of the ship, the direction and speed of its navigation, communications records and other data from the time of the sinking.

“If we analyze the data from the VDR, we may be able to get information on the weather conditions, whether the navigation was carried out properly and what kind of communications occurred during the accident,” a Seoul official told reporters on condition of anonymity.

Since its retrieval, the search authorities have put the VDR in de-ionized water to prevent corrosion, the ministry said. But the official did not rule out the possibility of the VDR having been rendered unusable during the sinking or corroded.

The search ship plans to continue its underwater operations to find the hull of the sunken ship and missing life rafts and film the hull when located.

In December, the South Korean government signed a contract with Ocean Infinity, a Texas-based exploration firm that runs Seabed Constructor, for the search. The deal is worth 4.84 billion won (US$4.3 million).

Families of the missing crewmembers stressed the need to determine the exact cause of the sinking, hoping the VDR will shed light on the tragedy.

“We hope that there will not be any suspicion left about the sinking by ensuring that all processes (of verifying the truth) are conducted transparently,” they said in a statement.