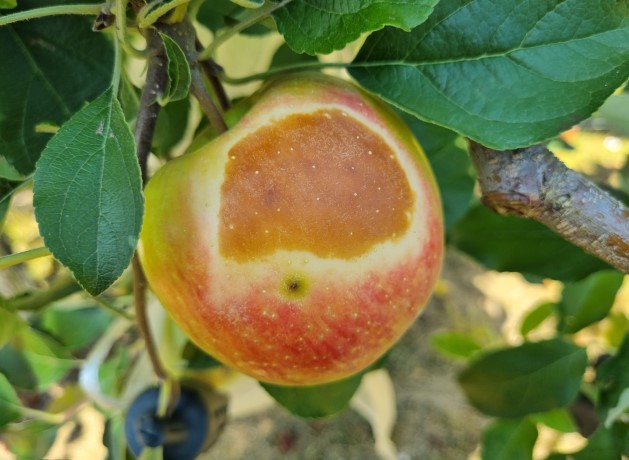 This photo provided by the Gangwon Agricultural Training Center on July 28, 2021, shows sunburn on an apple.

Seoul and almost all parts of the country have been gripped by a prolonged heat wave that sent daytime highs above 35 C, caused the tropical night phenomenon and affected the vitality of all living things.

According to local government officials and farmers, temperature-related agricultural, livestock and fisheries damage, such as withered crop leaves, overripe fruits and massive perishing of livestock and marine animals, is spreading in many areas.

This month alone, some 220,000 livestock animals died, unable to withstand the sweltering heat, they said.

The ongoing spread of green algae in reservoirs and lakes and signs of red tides in the sea are also raising concern about major damage to the aquaculture sector.

In Geumsan, a central farming county dubbed the capital of Korean ginseng, ginseng leaves are withered or dying due to high temperatures.

Ginseng is known to stop growing when the temperature goes over 27 C. Without efficient countermeasures, ginseng’s marketability tends to decrease even if it grows again next year.

“If the high temperature continues, widespread withering damage is feared for ginseng due to lack of soil moisture,” a Geumsan farmer said. 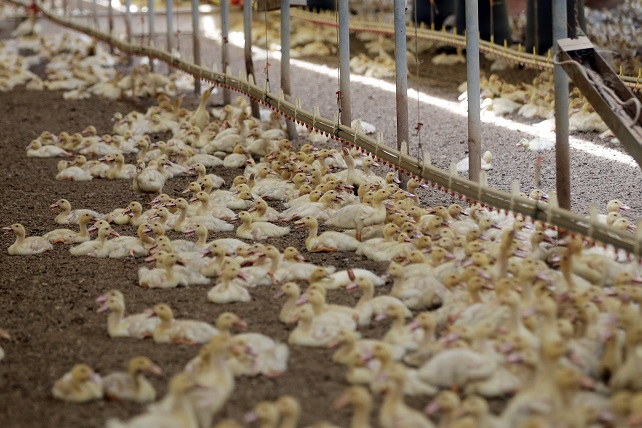 Ducks apparently exhausted from the sweltering heat sit on the floor of a farm in Naju, southwestern South Korea, on July 23, 2021. (Yonhap)

In Gochang, a southwestern farming county, watermelons are becoming overripe and turning dark red, as the temperatures inside greenhouses rise rapidly. Farmers are forced to throw away the watermelons whose commercial value has fallen.

Apple farmers in Gangwon Province counties of Yeongweol and Jeongseon have been asked to inject calcium into their crops and install light barriers to minimize heat damage.

In the southwestern province of South Jeolla, 87 farms reported that 28,763 livestock animals died this summer due to the heat wave. In one recent week, 19,679 chickens, 754 pigs and 630 ducks perished in the region.

In the central county of Yeongdong, 23 farms reported heat-related deaths of 17,288 chickens.

Nationwide, 227,387 livestock animals perished due to heat wave this summer as of Monday, the Ministry of Agriculture, Food and Rural Affairs said, fearing the heat damage is expected to grow until the middle of August. 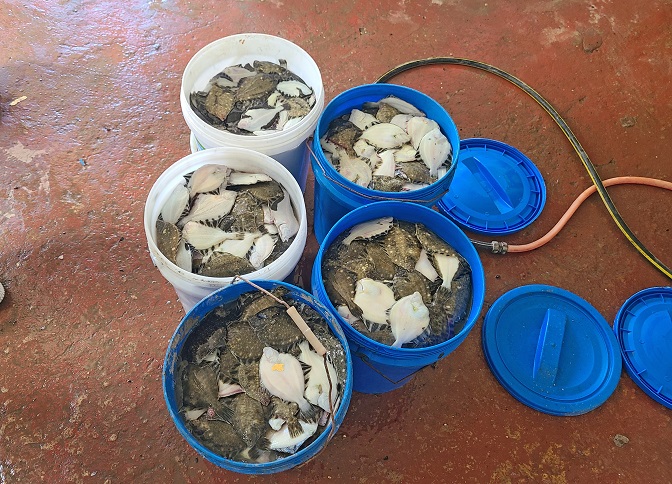 This photo provided by a fish farmer of Pohang, southeastern South Korea, on July 28, 2021, shows starry flounders that perished due to heat wave.

A fish farm in Uljin of the southeastern province of North Gyeongsang reported a mass death of starry flounders a week ago. Thereafter, six other farms in Uljin and adjacent areas reported heat-related perishing of about 57,000 fish.

Fish farms along the southwestern coast are also taking all possible precautions, including installation of liquefied oxygen and bottom-layer seawater supply devices and light barriers, to avoid heat damage.

On the southern coast, in particular, the risk of red tides is said to be growing due to the prolonged high temperatures.

“As high temperatures persist, unfavorable conditions for fish farming, such as red tides, are spreading,” said a fisheries official at the South Jeolla provincial government.