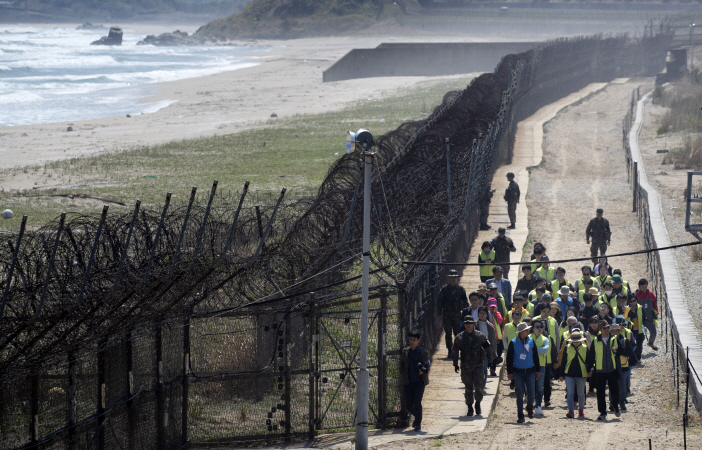 SEOUL, May 20 (Korea Bizwire) — The second inter-Korean border trail along the Demilitarized Zone (DMZ) that demarcates South and North Korea will be opened to civilian hikers next month, officials said Monday.

The central section of the DMZ in Cheorwon of Gangwon Province, about 90 kilometers northeast of Seoul, will be opened for the government-initiated “DMZ Peace Trail” program on June 1, the officials said.

The first DMZ Peace Trail was launched in an eastern coastal section in Goseong, Gangwon Province, on April 27, drawing hundreds of hikers to its scenic seaside routes over six days each week, with the trail closed on Mondays.

Civilian hikers’ access to the Cheorwon DMZ Peace Trail zone was approved by the United Nations Command (UNC) on May 8.

The DMZ, which is about 250 km long and 4 km wide, is one of the world’s most heavily fortified borders, with the rival Koreas technically in a state of war as the 1950-53 Korean War ended in a truce, not a peace treaty. Since the signing of the comprehensive military agreement in September last year, the two Koreas have pushed for several tension-reducing measures.

According to the officials, people wanting to walk along the Cheorwon trail can apply from Monday through the DMZ’s integrated information system website (www.dmz.go.kr/english), run by the Ministry of the Interior and Safety, or Durunubi (www.durunubi.kr), an online guide to hiking in Korea produced by the Korea Tourism Organization.

The Cheorwon trail will be run twice a day, except Tuesdays and Thursdays, every week. Up to 20 people can participate in each hike.

Hikers will begin their trek from the Monument for the Baekma (White Horse) Plateau Battle and walk or take a ride along the DMZ southern boundary before arriving at an Arrowhead Hill guard post. It will be the first time since the division of the Korean Peninsula that a guard post within the DMZ will be open to civilians.

“It is not mandatory for us to inform the North of the plan because the area civilians will be allowed to access is south of the military demarcation line and is under our jurisdiction. But we’ve decided to do so in consideration of several possible issues … such as visitors’ safety,” defense ministry spokesperson Choi Hyun-soo told a regular briefing.

The government sent the notification via an inter-Korean military communication channel, and it was not immediately known how the North responded, another ministry official said.

“All the roads visitors will use inside the DMZ were paved in order to prevent accidents, and military officers will join as guides,” he added.