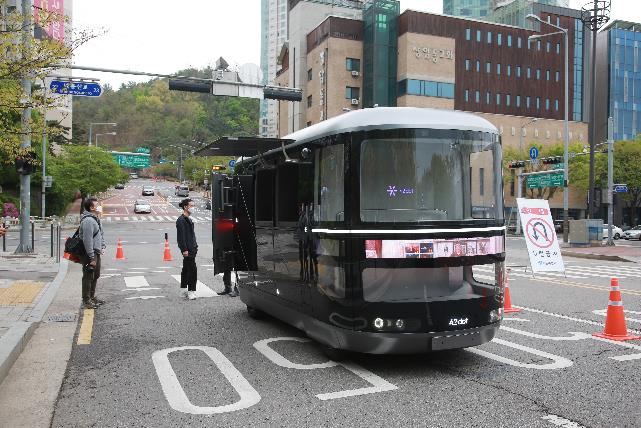 This photo, provided by the Seoul city government on July 20, 2021, shows a self-driving vehicle.

A new ordinance by the city government of Seoul on the operation of a special zone to host a pilot self-driving commercial vehicle project went into effect Tuesday in a bid to help expedite the commercialization of driverless cars in the city.

Under the ordinance, Seoul plans to introduce a range of fee-paying public transport services based on autonomous vehicles, such as self-driving buses and short-haul transport services available for use through mobile applications, as well as a special service aimed at transporting disabled passengers in wheelchairs across the Sangam district.

Ahead of the ordinance’s enforcement, the city in December designated sections of 24 roads in Sangam, together covering some 6.2 square kilometers, as a special zone to host the pilot self-driving transport services.

With an eye to kicking off the envisioned services in October, Seoul city will begin recruiting self-driving transport service operators later this month.

The city government will then install a steering committee in charge of safety regulations next month to help these services take off smoothly.

It also plans to dedicate part of city-run public parking lots to the pilot projects to help defuse any parking issues, according to the city.

“We will transform Seoul into an innovative city with a next-generation transportation system by advancing the commercialization of self-driving vehicles,” Baek Ho, a senior Seoul official in charge of city transport, said.