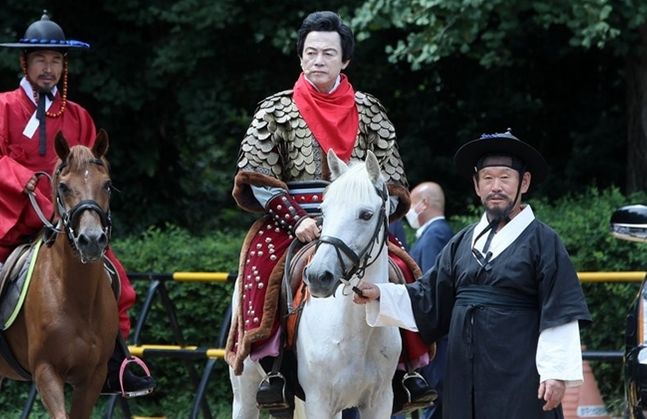 Huh Kyung-young shows up in a traditional suit of armor and on horseback to declare his third presidential bid at Haengju Fortress in Goyang, northwest of Seoul, on Aug. 18, 2021. (Yonhap)

SEOUL, Oct. 29 (Korea Bizwire) — Pompously clad in a Joseon-era general’s suit of armor, a longsword in hand, Huh Kyung-young, honorary chief of a little known political party, showed up on horseback at an historic battlefield site northwest of Seoul in August to declare his presidential bid in yet another bout of his unique political gimmickry.

Enacting the Joseon army’s heroic victory over invading Japanese forces at Haengju Fortress in one of the major Imjin War battles (1592-1598), the 71-year-old made a spectacle by playing the role of a national hero who slices the enemies to death and saves the country, in front of journalists and supporters.

He then changed into a sleek business suit and glided back to the audience in his famous Rolls Royce to declare his campaign pledge to run in the 2022 presidential election, solemn-faced throughout the whole event.

The pledges blatantly included a one-shot payment of 100 million won (US$85,258) to everyone aged 18 and above in emergency livelihood assistance upon his presidential victory, along with 1.5 million won in “public dividends” every month.

Huh also promised to give a newlywed couple 100 million won each as a subsidy, plus another 200 million won as a no-interest loan to help them buy a home. Giving birth will bring in another 50 million won per baby, he promised.

Huh said he will do away with 90 percent of the state penitentiary facilities, adopt a system to levy fines proportional to offenders’ wealth and collect “anti-tax evasion taxes” to bankroll his splurge of subsidies if he becomes president.

“Our nation is the world’s 10th-strongest economy, but the level of people’s lives is in 100th place. This attests to the fact that the country is not short on money, but it has a lot of thieves,” he rashly claimed. 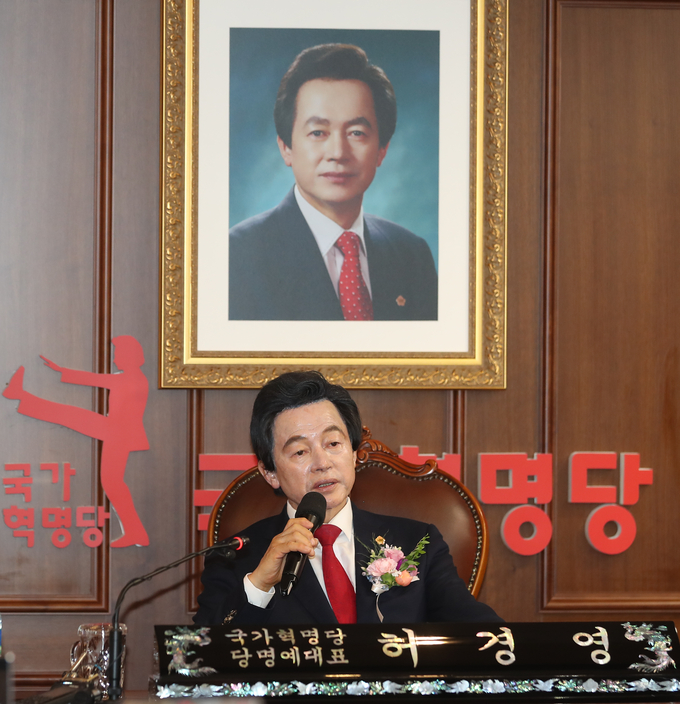 Huh Kyung-young, chief of the National Revolutionary Party that he has established, speaks during a press conference at the party’s headquarters in Seoul on Aug. 10, 2021, to announce that he will declare his intention on Aug. 18 to run in next year’s presidential election. Huh made unsuccessful bids for the presidency in 1997 and 2007 before losing the April 7 Seoul mayoral by-election. (Yonhap)

He also argued he has the power to boost the country’s gross national income per capita to US$100,000 within a five-year presidential term to propel the country to have the world’s biggest economy.

“I have the gift of prophecy and the power of management,” he boasted, capping his recklessly ambitious campaign promises with hardly credible statements.

Far from facing harsh scrutiny, Huh built a solid career out of those unrealistic pledges he has committed for his three presidential bids so far and other unsuccessful runs for several public official posts.

His campaign pledges and claims were deemed so absurd that voters regarded him as something between a con artist and an entertainer joking unmaliciously or a parody of a politician, gone overboard, rather than a regular one.

A popular adjective was coined after his name, “Huh Kyung-young-like,” which even established politicians often use to criticize rivals’ populistic campaign pledges.

Basking in growing public recognition of his name, Huh dropped a series of digital singles in 2009 and 2010, including “Call Me,” and threw a solo concert.

He also enjoyed the media limelight, some in a mocking way, for his claims that he can levitate and has an IQ of 430.

Among his campaign pledges was a plan to relocate the headquarters of the United Nations to the inter-Korean border village of Panmunjom if he wins the presidency. 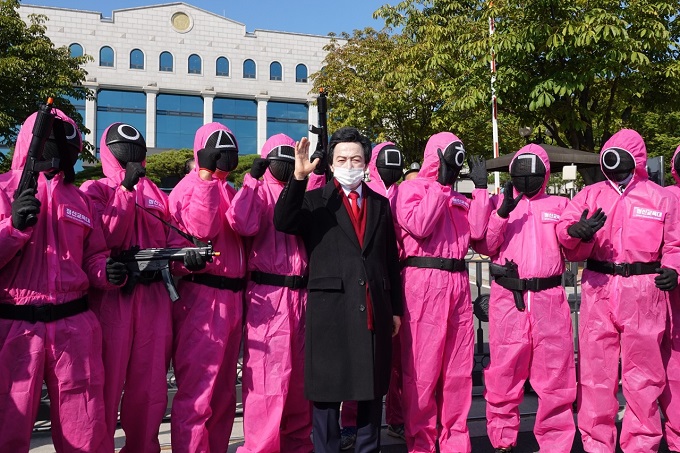 Huh Kyung-young is surrounded by people parodying notorious guards in the Netflix series “Squid Game” after he registered his preliminary presidential candidacy with the national election watchdog on Oct. 18, 2021. (Yonhap)

More blatant claims, however, landed him in jail.

Huh was convicted after lying during his second presidential run in 2007 that he was conditionally engaged to the then leader of the biggest conservative party Park Geun-hye, who went on to become president in the following election.

Courts ruled a slew of Huh’s 2007 election claims as false, including that he attended George W. Bush’s inauguration banquet on behalf of South Korea, and he is an adopted son of late Samsung Group founder Lee Byung-chul.

He was given a 1 1/2-year prison sentence for violating the public official election law and barred from standing for public elections for 10 years.

More apparent falsehoods by Huh, known to be making a living out of lecturing on prophecy and dubious practices of “healing,” have gone unchecked, however, including claims he made offline and in YouTube lectures that he came from the sky with the power of prophecy and healing, and that he is immortal.

In both of his previous presidential runs in 1997 and 2007, he finished seventh.

But he grabbed headlines by finishing third in the Seoul mayoral by-election in April with support of slightly over 1 percent.

It was a very far cry from the support garnered by the top two candidates but still a result substantial enough to sound an alarm for the political establishment here.