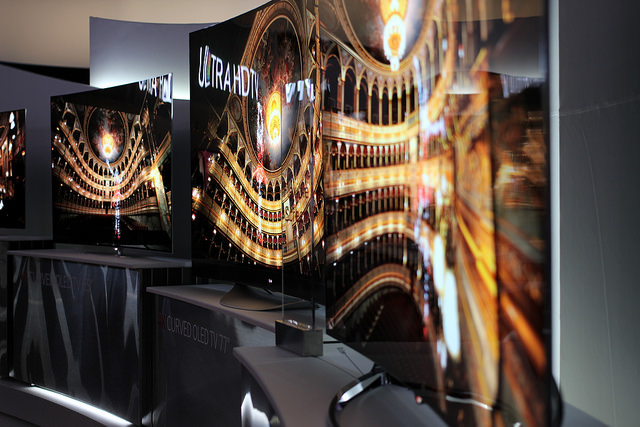 Market research firm HIS Markit expects the global OLED display market to more than triple in value by the year 2022 to $29.1 billion, from 8.7 billion in 2014. (image: Flickr/ Maurizio Pesce)

SEOUL, Nov. 25 (Korea Bizwire) – In an effort to move away from stagnant investment in the semiconductor industry, local semiconductor equipment manufacturers are expanding into the OLED market, which has been increasing in terms of both profitability and investment from Korea and overseas.

According to the Financial Supervisory Service, semiconductor manufacturer Jusung Engineering’s display equipment sales accounted for 44 percent of its total revenue in Q3, an increase of 20 percent compared to Q3 2015. During the same period, semiconductor sales decreased by 21 percent to 48 percent.

Jusung, founded in 1995, has been considered a milestone semiconductor equipment company in Korea. Although it did introduce several non-semiconductor products – displays, solar technology, and lighting – it wasn’t until this year that Jusung starting taking a more aggressive stance in targeting the OLED market.

Its new-found initiative was highlighted in September and October, when it signed a 75.8-billion-won ($64.4 million) sales agreement to supply equipment to LG Display.

“The core technology for semiconductor and display equipment is similar,” said Jusung CEO Hwang Chul-joo. “So as a company that already possessed core semiconductor technology, it hasn’t been difficult for us to expand our technology and apply it to our OLED equipment. We have thus been able to benefit from some positive outcomes.”

“We’re currently cooperating with a few Chinese start-ups, ventures that we believe will be positively reflected in our 2017 performance,” he added.

Wonik IPS is another semiconductor equipment manufacturer that has made a push into the OLED market, and its sales of OLED appliances now make up roughly 30 percent of total earnings. The biggest driving factor for Wonik this year was growing investment from Samsung Display, the company’s principal customer.

With the company’s newfound cash cow, Wonik saw its quarterly total sales increase by 82.1 percent in Q3 to 95.6 billion won, and its operating profit jump by 189.2 percent to 10.7 billion won.

Similar efforts are being made by TES, which has also been investing in OLED equipment technology after announcing it would diversify its business structure with less focus on its semiconductor equipment.

TES entered a 13-billion-won agreement to supply OLED equipment to Chinese display companies Everdisplay Optronics and China Star Optoelectronics Technology in 2015 and 2016. It recently obtained a technology patent for its “Electrical Connector Assembly”, which according to the company can boost the productivity of OLEDs.

Industry watchers note that such changes are the result of stagnant investment in the semiconductor industry, which is already dominated by big-name corporations like Samsung Electronics. In contrast, the display industry is picking up steam, centered around OLED devices, with more Chinese and Taiwanese companies making rapid inroads.

Market research firm HIS Markit expects the global OLED display market to more than triple in value by the year 2022 to $29.1 billion, from 8.7 billion in 2014.