“SHOESPOT” will be a new name for Seongsu Station. (Image: Seoul city government)

SEOUL, Korea, Dec 12 (Korea Bizwire) –  Seongsu-dong, in the southeastern area of Seoul, has been Korea’s leading shoe-manufacturing center for decades with more than 500 related companies located in the district. Now city of Seoul has decided to help boost the local economy by promoting a number of shoe-related projects in and around Seongsu Station — which is being renamed as  “SHOESPOT SEONGSU” — declaring a revival of the handmade shoe-making neighborhood.

Most prominent example of the recent attempts is the launching of the local community’s handmade-shoe brand, ‘fromSS’. Its first store will open right outside of the Station. The store will be selling men’s, women’s handmade shoes and sneakers at reasonable prices and will be open from 10 AM to 8 PM. There will be six more box shops set up close to this store for other brands. In front of these stores will be a sculpture named “Red Dreams of a Cat” symbolizing the passion of the Seongsu handmade shoe industry.

Serving as a hub role of sorts, this structure is expected to raise the symbolic values of the specialized street and help promote the local industry to the general public.Various free and empty spaces inside Seongsu Station will be used to introduce the public to the map of Seongsu-dong’s handmade shoe industry and its status. Four different sectors will be launched inside of the Station as part of a new marketing campaign: “Goodoozium”(shoe-zium) on its history, “Shoedatz” on its people, space and time, a “Craftsman’s Workshop” to show the process of hand-making and “da Vinci shoes Corner” to derive creative thinking. The city is also expecting that they will help firmly establishing the identity of the workers in the district by providing them with extra something to be proud of.

City of Seoul is preparing a big launching event on 13th of December when the opening ceremonies of the stores and SHOESPOT SEONGSU will be held. On this day, Mayor Wonsoon Park is scheduled to give a speech where he will be mentioning a.testoni, a famous Italian high-end shoe company he visited during his European tour. He will be addressing his plans to further contribute to the growth of the area hoping that the next a.testoni will come from Seongsu-dong.

Mayor Park already toured around the shoe factories around the area March last year, when he said people should not disregard the importance of traditional handmade industry, which can help create jobs and reinvigorate the city’s economy. This time he is also scheduled to take time to listen to the voices of the workers live and share opinions with them. 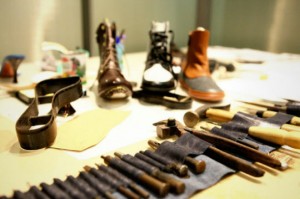 On this day, an award-ceremony for a famous local shoemaker, Hong-shik Yu, will also be held.  He will be receiving the First Master Craftsperson Certificate and Medal. This ceremony will continue to be held every year. In addition, the four days from December 12 to 15 will be designated as the “Shoes Days”, and numerous exhibitions of related products will take place near the stores.

Seoul is expecting that once “SHOESPOT SEONGSU” is established, not only the citizens’ views on handmade shoes will change, but also the local industry will naturally gain exposure to the public which will result in significant promotion effects. Having been shunned by the young generation recently, the local industry is quite stirred up with the hope that a Renaissance is finally arriving after a crisis of discontinuities of its craftsmanship.