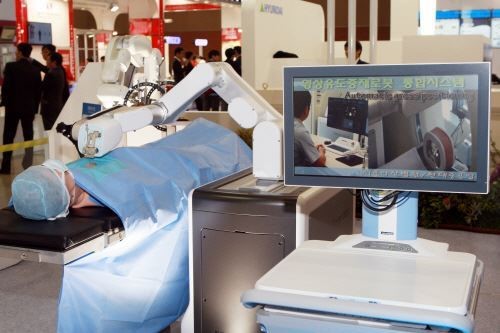 The robot can be used for patients with liver or lung cancer for biopsy, freeze treatment, or radiofrequency ablation.(image:Seoul Asan Medical Center)

SEOUL, Nov. 4 (Korea Bizwire) – Seoul Asan Medical Center, in partnership with Hyundai Heavy Industries, has succeeded in developing a surgical robot after three years of R&D effort. The pilot version of the robot can get a sample of tissue with a needle from the source of lesion area about 1 centimeter over the abdomen and chest for testing and treatment.

The robot can be used for patients with liver or lung cancer for biopsy, freeze treatment, or radiofrequency ablation. The hospital and Hyundai Heavy will complete an animal testing early next year and apply for performance test with the Ministry of Food and Drug Safety. They expected the full commercialization to be available by 2017.

A medical staff with Asan Medical Center explained that the robot can reduce the surgery time substantially by automating image photographing and surgical procedure while helping cut the radiation exposure to the patient and doctor. He also said surgery using the robot is safer and more precise as the alarm will set off if the robot places the needle on a part not intended for surgery.

Prof. SeoJoon-beom of the Department of Radiology at Asan Medical Center in Seoul said, “Even though there are many surgical robots in the medical robot market, there has been almost no medical intervention robot. Once our robot gets fully commercialized, it would contribute immeasurably to creating added value through medical-industry collaboration.”