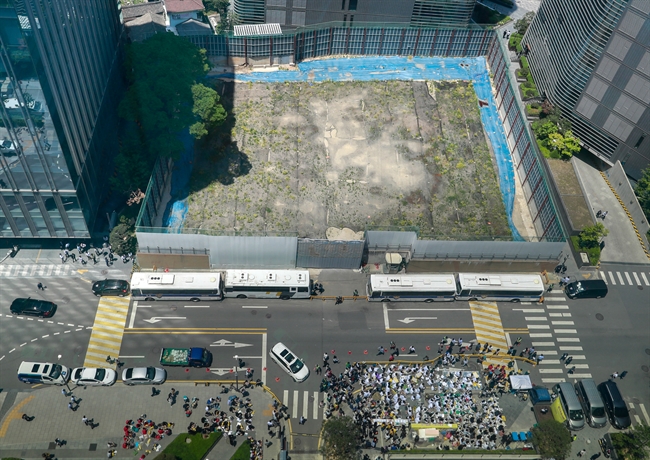 The former site of the Japanese Embassy building in central Seoul remains vacant as the Tokyo government has yet to start construction of a new building after obtaining a building permit in 2015. (Yonhap)

SEOUL/TOKYO, Apr. 10 (Korea Bizwire) — The construction permit for a new Japanese embassy building in central Seoul has been revoked, as Tokyo failed to break ground for four years after winning the permit, municipal officials said Wednesday.

Seoul’s Jongno Ward Office said it notified the Japanese Embassy on March 4 of the cancellation of the building permit issued in 2015, officials said.

The revocation came as the Japanese government has delayed the start of construction work for a new embassy building in the South Korean capital for unclear reasons after obtaining the building permit four years ago.

“Japanese Embassy officials said in a meeting in late February they will accept a revocation of the building permit because the construction work cannot be started due to circumstances in their home country,” said an official at the Jongno Ward Office, adding the cancellation was implemented in accordance with legal procedures.

In 2015, the Japanese Embassy dismantled its antiquated building on Yulgok Street in Jongno Ward and relocated to a nearby building.

At that time, the Japanese government said it will build a new embassy building on the former site with six floors above ground and three underground floors by 2020.

Officials at the Jongno Ward Office said they had asked the Japanese Embassy to start the new building’s construction several times, but the Japanese mission failed to respond each time.

“Construction can start anytime if the building permit is obtained again, but there was no contact from the Japanese side after the cancellation,” said the Jongno Ward official.

“But (I) can’t divulge details of the construction plan as they are related to the internal review process of the administration authorities,” he told a regular press briefing.

Watchers speculate that the Statue of Peace installed in front of the former embassy building to symbolize Korean victims of sexual slavery during Japan’s colonial rule and a weekly protest rally by the slavery victims and their supporters there may have something to do with the construction delays. 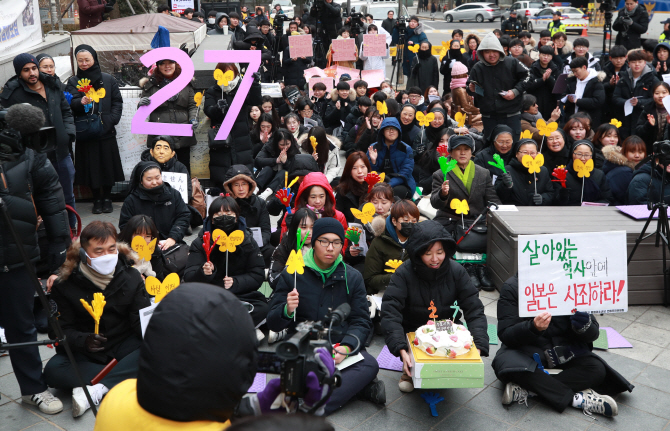 The 1,369th Wednesday rally takes place in front of the Japanese Embassy in Seoul on Jan. 9, 2019, marking its 27th anniversary. (Yonhap)

The 1,382nd weekly protest rally by the victims, who are euphemistically called “comfort women,” is to be held in front of the former site of the Japanese Embassy building at noon Wednesday. The Statue of Peace was installed in December 2011 in commemoration of its 1,000th gathering.

The revocation of the constriction permit came as the taut Seoul-Tokyo relationship shows no signs of improvement amid their ongoing tussles over a series of historical and territorial issues stemming from Japan’s 1910-45 colonization of the peninsula.

Last November, Seoul announced its decision to dissolve a foundation that Tokyo funded to support former South Korean sex slaves under a 2015 bilateral agreement. Tokyo saw the dissolution as a breach of the agreement.

South Korea’s Supreme Court has recognized the individual rights of forced labor victims to claim damages. But Japan argues that all reparation-related issues were settled in a 1965 deal that normalized bilateral diplomatic ties.

Observers have raised concerns that persistent spats between the neighbors could undermine efforts for bilateral cooperation in South Korea’s push for North Korea’s denuclearization and a lasting peace on the divided peninsula.