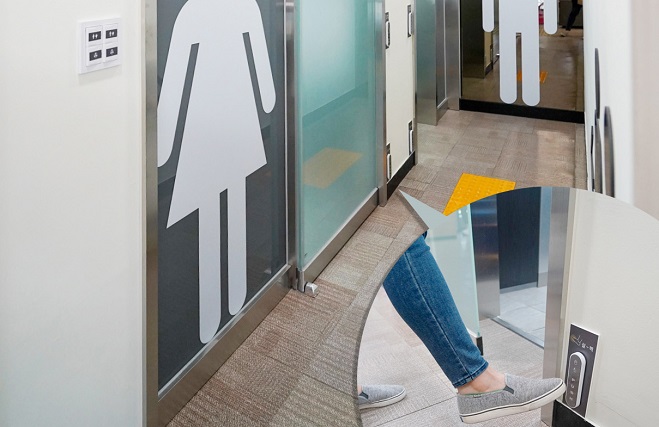 This photo provided by the Seoul Metropolitan Government shows a new public restroom with a foot switch.

SEOUL, July 15 (Korea Bizwire) — The public restrooms in Seoul are being transformed with a new ‘universal design.’

The Seoul Metropolitan Government and its affiliated Universal Design Center said Wednesday that they had applied non-discriminatory ‘universal design’ for the public restrooms at three district community centers.

Universal design refers to design principals make a building or product accessible to all people regardless of disability, gender, age or nationality.

The city government posted large pictographs at the entrance of the public restrooms aimed at enabling those with weak eyesight or foreigners to find them more easily.

The entrance door was also changed into one that can be opened by pushing a button, with a foot switch that also allows users to open the door by pressing it with a foot.

The city government plans to apply the universal design not only to public restrooms but also to other infant-friendly spaces, including feeding rooms, by the end of this year.