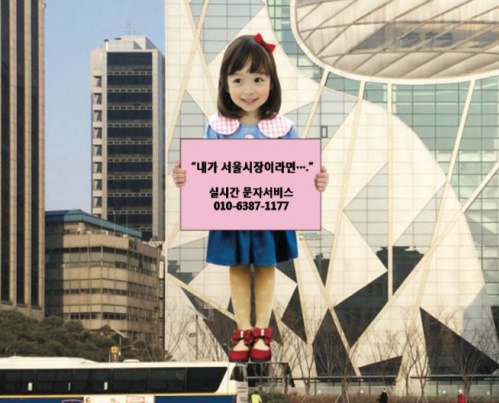 The first suggested topic for the citizens’ messages would be “What if I am a Seoul Mayor,” in which citizens can say to the reelected Mayor Park Won-soon what’s on their mind.(image:The Seoul Metropolitan City Government)

SEOUL, June 22 (Korea Bizwire) – The Seoul Metropolitan City Government said that it would kick off the Citizens’ Bulletin Board on the walls of its city hall building using the electronic technology. Any citizen can post short messages on the bulletin board through their mobile phone text messaging.

The LED board is as large as 13 meters in length and 8 meters in width, wrapped in a picture of a child holding the electronic board with a message “We will listen to any sound no matter how small it is.”

The bulletin board is run six hours a day between 7 and 10 in the morning and the evening. The length of each message must be within 40 Korean characters or 80 English letters, with up to three messages allowed per person in an hour. Expletives, libelous messages, or slanders will be filtered out through a computerized system. Commercial or political messages will also be filtered out, with the caller’s number registered as a spam number.

The first suggested topic for the citizens’ messages would be “What if I am a Seoul Mayor,” in which citizens can say to the reelected Mayor Park Won-soon what’s on their mind. Anyone who wants to say something to the new city government administration that will set sail on July 1 can do so by sending a text message to 010-6387-1177.