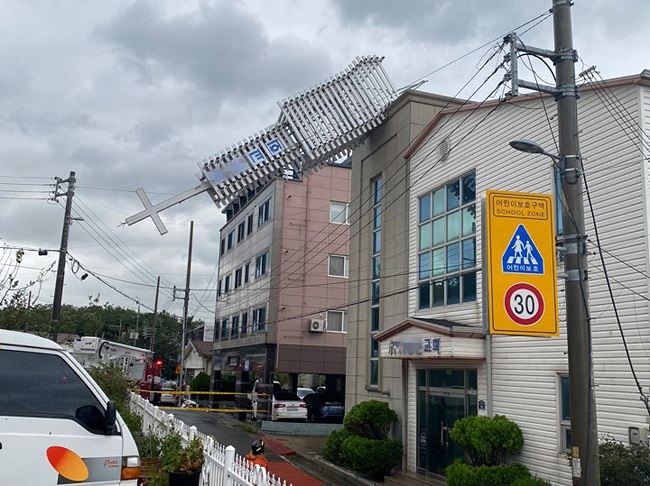 The spire of a church lies on top of another building due to strong winds in the southeastern port of Pohang on Sept. 7, 2020, after Typhoon Haishen passed through the region the same day. (Yonhap)

SEOUL, Aug. 16 (Korea Bizwire) — A number of churchgoers are opposing Seoul Metropolitan Government’s plan to take down old spires at church buildings due to safety reasons.

“Even if local authorities pay for taking down the spire, a small church wouldn’t be able to afford setting up a new one,” a petition on Cheong Wa Dae’s website said. “It’s religious persecution. It’s persecution against the church.”

So far, more than 60,000 people have signed the online petition.

Seoul conducted investigations at 7,919 churches in the city and issued instructions last month to repair or remove spires that are over four meters tall or fail to meet safety requirements, offering to provide a maximum subsidy up to 4 million won (US$3,421) to take them down.

The city explained that spires pose a significant risk during strong wind and typhoons, and measures should be taken to ensure safety during summer showers and storms.

The city, however, will not provide subsidies to build new spires, claiming that it doesn’t fall under the category of ‘public safety.’

So, there are chances that small churches that cannot afford to build new spires will not fulfill the city’s instructions to remove them.