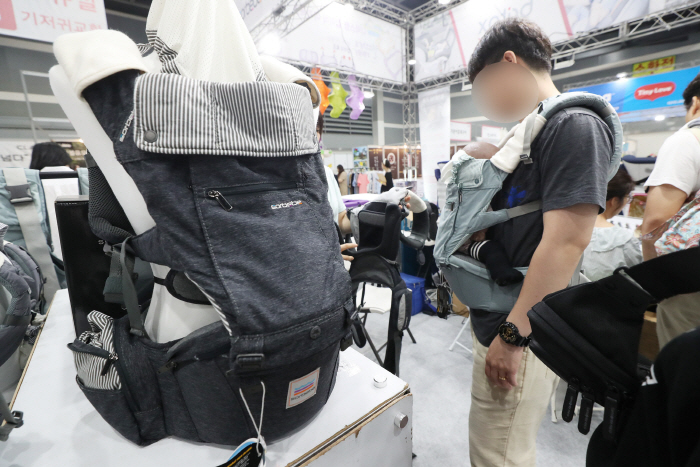 A man carries an infant in a baby carrier at a promotion event for baby and kids products in Seoul on July 4, 2019. (Yonhap)

Statistics Korea reported that there were 45,974 men over 40 years of age who became fathers last year.

The share of mothers over 40 years of age went from 0.3 percent in 1993 to 5.1 percent last year, which shows that the aging trend is more prevalent among fathers.

Looking at the change in the number of children born since 2016 sorted by the age of the father, fathers older than 50 years old were the only group that saw a constant growth of childbirth in the last five years.

As the low birthrate is leading to fewer newborn children in the country, the aging fathers are emerging as a new social factor that could take a toll on households reaching retirement.

Headhunting firms Job Korea and Albamon conducted a survey in September of last year of 530 people with jobs, which showed that the preferred age of retirement among them was 49.1 years old on average, down by 1.2 years since four years ago, indicating that people would still like to retire at a younger age despite the aging population.