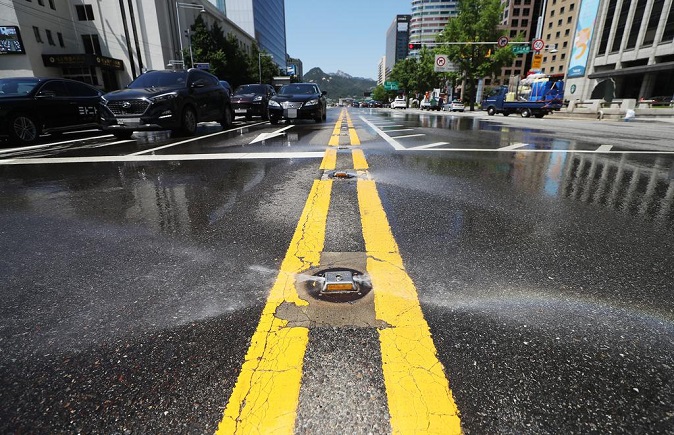 Water sprays from a cooling road system set up on the centerline of Sejong Street in downtown Seoul to cool down the hot road amid a heat wave on June 15, 2020. (Yonhap)

SEOUL, April 13 (Korea Bizwire) — The Seoul Metropolitan Government said Tuesday it will operate “cooling road systems” to lower fine dust and road temperatures during the period from April to October.

Designed to cool hot roads and reduce fine dust, the system consists of small square-shaped water spray devices installed in the centerline of a road.

To reduce road temperatures, the city government plans to spray water through cooling road systems more than three times per day during the hot summer period from June to September.

For the months of April, May and October when air quality is bad, the systems will be operated flexibly depending on special weather alerts for fine dust.

In Seoul, the systems with a total length of 3.5 kilometers are installed in front of 13 subway stations, including City Hall station.