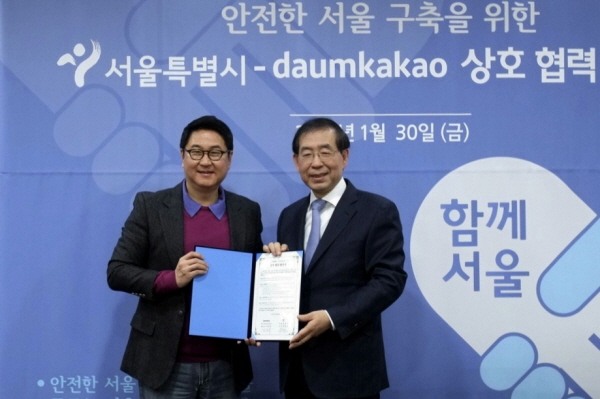 SEOUL, Jan. 30 (Korea Bizwire) — The Seoul city government said Friday it signed an agreement with Daum Kakao Corp., the operator of the top messaging app KakaoTalk, to provide Seoul citizens with real-time information on disasters via the messenger.

The service would allow subscribers to quickly and conveniently get information on real-time situations and what they should do when fires and natural disasters such as heavy snowfalls, floods and earthquakes hit the city, it said.

Subscribers will also be informed of various safety-related information such as how to prevent disasters and respond to yellow dust and heat waves, it added.

Citizens should first add the Seoul city government to their list of chat ‘friends’ in order to use the service.

The agreement was signed between Seoul Mayor Park Won-soon and Lee Sirgoo, co-chief of Daum KaKao, in Park’s office.

“As KakaoTalk is the country’s most-used mobile messenger, we expect the new service will serve to quickly spread information on disasters through the KakaoTalk messenger and share safety-related information that is useful in our daily lives,” Park was quoted as saying in a release.