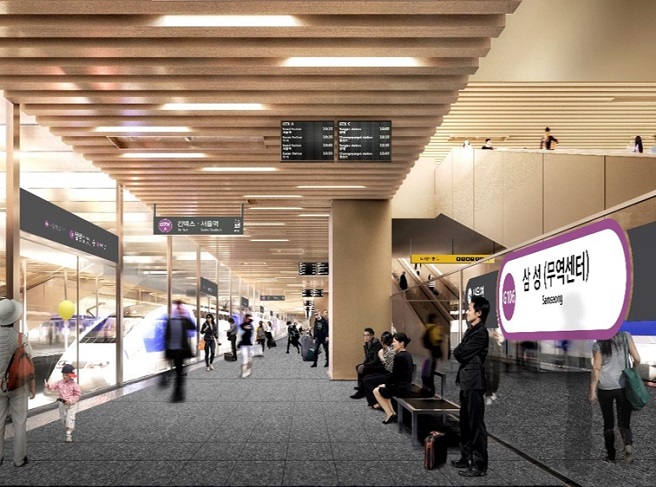 This sample image, provided by the Seoul city government, shows the transit center to be built at Yeongdong Boulevard in the southeastern ward of Gangnam by 2027.

SEOUL, Sept. 24 (Korea Bizwire) — Seoul city plans to install an eco-friendly air conditioning system, which uses renewable hydrothermal energy created with water from the Han River, at a public transit complex planned to be built by 2027, its officials said Thursday.

A hydrothermal energy system is a technology that uses water temperature that is cooler than the temperature of the atmosphere in summer and warmer ind winter, providing the energy extracted from water for heating or cooling with a “heat pump,” a thermal transformer.

The city said it plans to provide some 70 percent of cooling and heating with hydrothermal energy at a massive transit center for buses and railways planned to be constructed at Yeongdong Boulevard in the southeastern ward of Gangnam by 2027.

With the new air conditioning system, the city estimated it could reduce 1,000 tons of greenhouse gas and 300 million won (US$256,586) of electric charges and other operation costs per year, according to the city government.

The city government signed a memorandum of understanding with Korea Water Resources Corp. on Wednesday on adopting the new system.

This marks the first attempt to apply the technology at a public facility, according to the city government. It has already been adopted in private sector facilities, such as Lotte World Tower in southeastern Seoul.

A city official in charge of Seoul’s infrastructure said the city aims to apply the technology to more public facilities going forward.