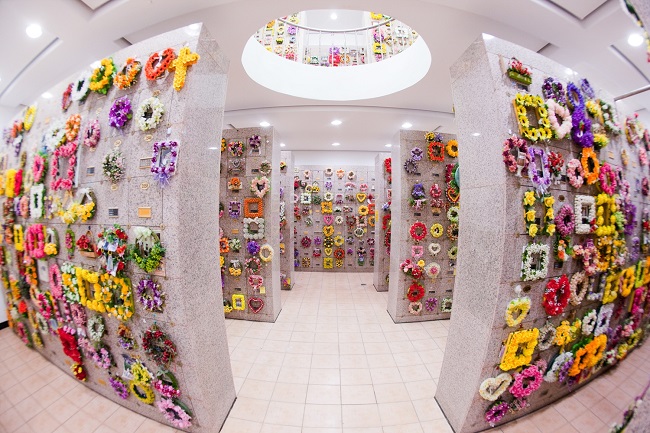 This photo, provided by the Seoul city government, shows an indoor charnel house in Paju, 33 km north of Seoul.

SEOUL, Jan. 29 (Korea Bizwire) — The Seoul city government said Friday that some of its charnel houses will close during the upcoming Lunar New Year holiday to help contain the spread of the new coronavirus.

The city-affiliated Seoul Facilities Corp. (SFC), which operates 15 cemeteries and memorial parks, will close five indoor charnel houses in Goyang and Paju in nearby Gyeonggi Province from Feb. 6-7 and Feb. 11-14.

The Lunar New Year holiday falls on Feb. 11-13 this year.

Many Koreans, as a custom, visit their ancestors’ graves and charnel houses during major traditional holidays.

To prevent large crowds from gathering amid the pandemic, many public cemeteries and charnel houses were closed during the Chuseok fall harvest holiday in early October as well.

This year the SFC plans to ban gatherings of five or more people at its public cemeteries and prohibit eating there, in line with the current social distancing rules in the greater Seoul area.

Seoul and the surrounding Incheon and Gyeonggi Province have been under Level 2.5 restrictions, the second-highest in the country’s five-tier social distancing scheme, since early December.

The ban on private gatherings of five or more people was added shortly before Christmas.

The SFC asked people to refrain from holding on-site memorial ceremonies and use its online services instead.