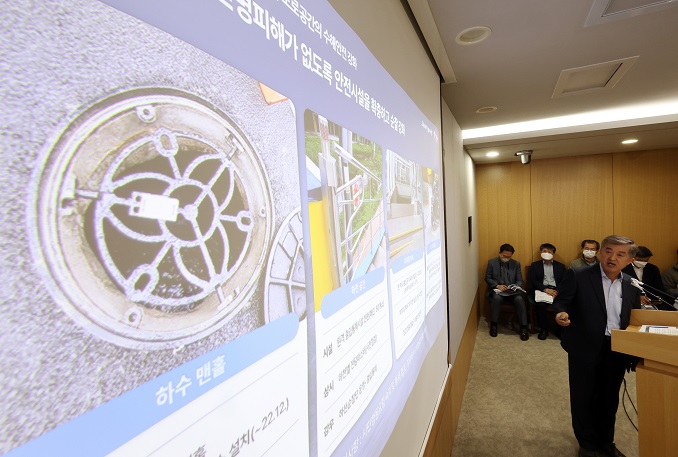 Han Yoo-seok, director of water circulation and safety of the Seoul city government, announces measures to enhance the city’s flood response systems during a news conference in the city hall on Oct. 6, 2022. (Yonhap)

The 10-year comprehensive plan came two months after a record-breaking rainfall in early August left 14 people dead and six others missing across the country.

“To cope with the climate crisis, we will undertake a drastic transformation of the flood prevention systems,” the city said.

“The key is to build a more sophisticated flood safety net by upgrading our disaster prevention goals and capabilities according to the changed conditions.”

The capital plans to inject a total of 3.5 trillion won (US$2.5 billion) in the projects over the next 10 years.

The city decided to elevate the performance targets of flood prevention facilities for the first time in 10 years.

The rainfall treatment goals for new facilities will be raised next year from the current 95 millimeters per hour to 100 mm per hour across the city, and to 110 mm per hour for the flood-prone Gangnam area in southern Seoul.

The projects also include deep underground rainwater storage and drainage facilities to be constructed in six flood-vulnerable areas over the next 10 years. 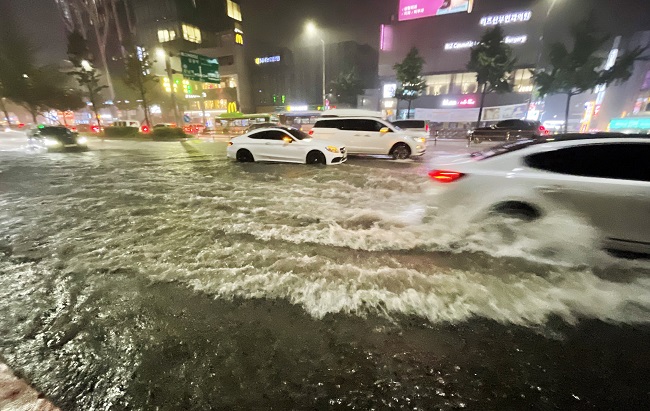 This Aug. 8, 2022, file photo shows a road in southern Seoul flooded due to heavy rain. (Yonhap)

The 1.5 trillion-won plan was first announced by Mayor Oh Se-hoon on Aug. 10. The construction is scheduled to start in July next year, the city said.

The overall capacity of the city’s water circulation facilities will more than double by 2040, according to the plan.

In addition, the city will take advantage of new technologies to establish a smart warning system capable of rapidly alerting and evacuating people in dangerous areas.

An artificial intelligence-based integrated flood prevention system that automatically analyzes data in real time and predicts floods will be established by 2030, the city government said.

The city will also take measures to better protect residents of semi-basement homes, including emergency support systems for evacuation and recovery and a 12-billion won plan to establish flood barriers in their homes.

During the August deluge, three family members drowned while trapped in their subterranean dwelling in Sillim-dong, southern Seoul.