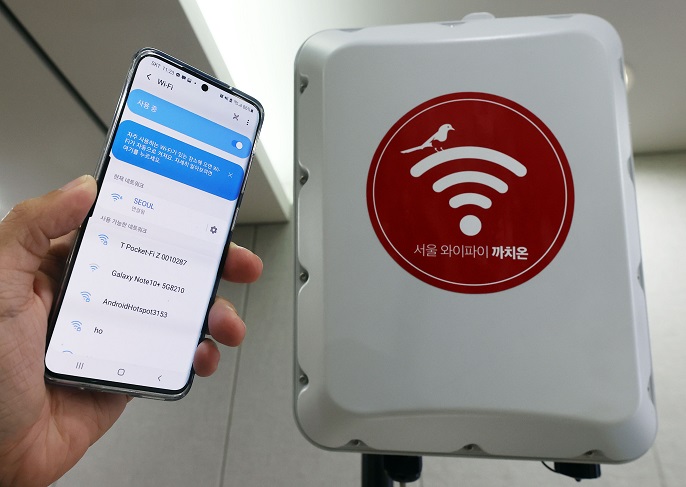 The free service, named “Kkachi On,” will be introduced in the eastern ward of Seongdong and the southwestern ward of Guro on Sunday, before being expanded to the Eunpyeong, Gangseo and Dobong wards in mid-November, according to the city government.

“Kkachi” is the Korean word for magpie, a symbol of the capital city and a bird known to bring good luck, and “On” refers to the Wi-Fi service being turned on, it said.

Users will be able to access the service in most public spaces, including parks, traditional markets, streets and roads, by connecting to the network “SEOUL” on their smartphones.

After the initial access, mobile phones will automatically connect to the network when it is available.

For a secure connection, users can choose the network, “SEOUL_Secure,” and type in “seoul” for both ID and password.

Wi-Fi services on city buses will be provided on separate networks named for each route. This is to ensure a stable connection and to prevent signals from crossing each other and causing interference, the city government said.

Kkachi On” is part of Seoul city’s “Smart Seoul Network” project, which aims to build a high-speed public network in the city spanning 5,954 kilometers and including some 11,030 “Kkachi On” stations by 2022.

In the five wards designated for the trial service, the city government plans to extend its network by 332 km to 1,150 km and increase the number of Wi-Fi access points from 1,364 to 3,144 by the end of this year.

The Ministry of Science and ICT has raised objections, citing laws that prohibit local governments from operating their own telecom services and ban the use of self-operated networks to provide telecom services to the public.

The city government maintained that “Kkachi On” does not violate any laws as it is a not-for-profit public service, which also aims to fulfill two laws mandating the state and local governments work to ensure universal access to telecom services and reduce the gap in the population’s level of access.

To address the dispute, the city government said it has proposed revisions to the law and will continue to discuss the matter with the ministry.