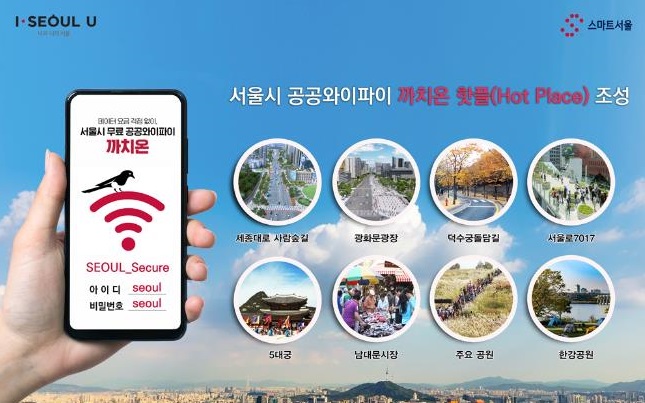 This photo, provided by the Seoul metropolitan government on April 5, 2021, shows a promotional image of the city’s new Wi-Fi service to be launched in May. The upcoming service, named “Kkachi On Hot Place,” will offer public Wi-Fi with four times faster speed.

The upcoming service will offer speed that is four times faster and simultaneous coverage 2.5 times bigger than the current one, according to the city government.

It will be available at 17 popular places in the city, the so-called Kkachi On Hot Place, including Gwanghwamun Square, five royal palaces of the Joseon Dynasty (1392-1910), Namdaemun Market and Han River parks.

“Kkachi On” refers to Seoul’s public Wi-Fi service. Kkachi, magpie in Korean, is a symbol of the capital city and known to bring good luck.

Users can choose “Seoul_Secure” on their mobile phones to gain access to the service. After the initial access, phones will automatically be connected to the network whenever it is available.

More information on over 10,000 public Wi-Fi zones in the city is available on Seoul’s digital map in Korean, English, Chinese and Japanese.