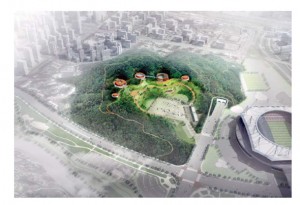 The oil storage facility in Mapo, in the west of Seoul, which has been abandoned for 13 years, will be revived as a cultural space themed with environment and rebirth. (image:Seoul City Government )

SEOUL, Korea, Jan 10 (Korea Bizwire) –The oil storage facility in Mapo, in the west of Seoul, which has been abandoned for 13 years, will be revived as a cultural space themed with environment and rebirth. The total area is 146,245 square meters, about 11 times bigger than that of Seoul Plaza right in front of the Seoul City Hall.

The Seoul Metropolitan City Government announced on January 9 a plan to create a public space in the Mapo Oil Storage Base after six months of public hearings and idea contests. By taking into account the fact that the area around the storage was the city’s garbage dump and that it is close to major performance venues such as the Sangam World Cup Stadium and the Digital Media Center, the city government decided that it would be appropriate to build a culture park on the site.

Established in 1979 and closed permanently in 2000, the oil storage center has five large-scale tanks buried at the foot of Mt. Maebong. Although the surrounding areas have seen a rapid pace of makeover for the past ten-or-so years, the oil storage site has remained as remnant of the industrial age. Instead of demolishing the whole facility, the city government will keep the 15-meter tank walls and retain the natural topography of the area as much as possible.

Within the cultural park, there will be spaces for exhibition, library, and performance, as well as other amenities such as walking trails, eateries, and parking. The city government will soon invite blueprints for the park including internationally renowned architects. The first stage of the construction will commence by 2016.