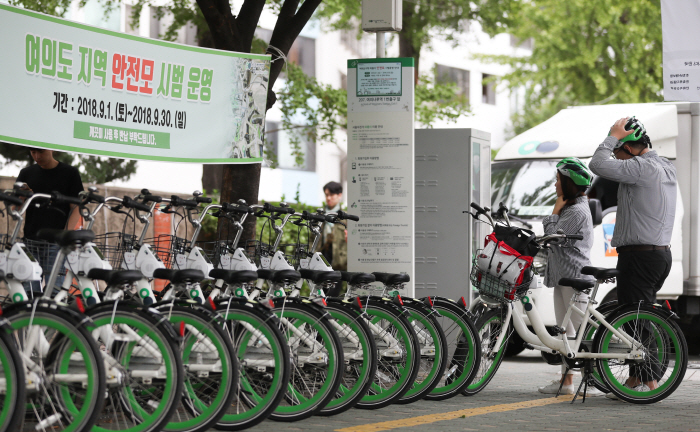 To stimulate the street economy, 424 bike shops across the city will be in charge of repairing and maintaining public bikes at nearby parking stations. (image: Yonhap)

To stimulate the street economy, 424 bike shops across the city will be in charge of repairing and maintaining public bikes at nearby parking stations.

A total of 24 city institutions including the Seoul Metropolitan Facilities Management Corporation and Seoul Metro will participate in this innovative scheme.

The company will carry out reconstruction projects for old public homes while extracting additional homes from underused facilities.

SH will also organize groups of civic stockholders to have more citizens participate in revitalization projects as well as housing welfare.

The Seoul Credit Guarantee Foundation plans to increase the ratio of supporting credit guarantees from 20 percent to 30 percent by 2022.

The foundation will strengthen its ‘three-NOs’ policy that allows customers to enjoy credit guarantees without having to visit the foundation, submit documents, or engage in face-to-face consultations.

The Seoul Business Agency, in collaboration with rapidly growing distribution platforms for ASEAN markets, plans to pave the way for smaller beauty and fashion companies to tap into external markets.

The Seoul 50 Plus Foundation plans to build social contribution models that will allow citizens over 50 years of age to support upcoming generations through various services such as childcare and employment support.

The Seoul Medical Center will begin the ‘Mom’s touch care project,’ where a group comprised of doctors, nutritionists, and social workers will be providing care services to single-person households recently discharged from the center who have no family members to rely on.

The center will also provide a pregnancy and birthing clinic for disabled women to help them go through pregnancy with the utmost ease and comfort.

The Sejong Center for the Performing Arts will create a ‘culture and arts street’ in the area around its central stairs connecting to Gwanghwamun Square.

Seoul Metro will implement smart train systems that collect and analyze cases of train failures in real time, using the data to detect failure indications, automatically syncing them with the list of available parts and logging them simultaneously.