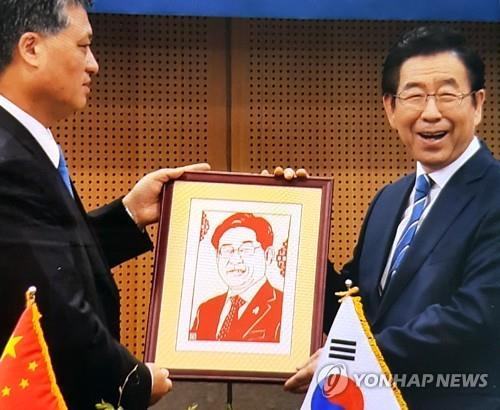 Seoul Mayor Park Won-soon (R) poses with a gift of a portrait from Ma Xingrui, governor of the southern Chinese province of Guangdong, at his office in downtown Seoul on April 5, 2019. The Chinese governor mistakenly gave the mayor a portrait of Gyeonggi Province Gov. Lee Jae-myung. (Yonhap)

SEOUL, Apr. 5 (Korea Bizwire) — Seoul Mayor Park Won-soon was given a true surprise gift by a Chinese guest making a friendly visit to South Korea on Friday — a portrait of a political rival.

Ma Xingrui, governor of the southern Chinese province of Guangdong, and a delegation of the province’s business leaders visited Seoul City Hall for talks with Park on expanding bilateral economic cooperation.

After signing a memorandum of understanding (MOU) on closer economic cooperation, Ma said he had prepared a surprise gift for Park and presented him with a portrait of a Korean man. The Chinese government added that the portrait is a drawing of Park.

On removing its wrapping, however, the Seoul mayor was stunned to find a portrait of the governor of Gyeonggi Province, Lee Jae-myung.

“The Chinese side belatedly learned after the MOU-signing ceremony that the man in the portrait is the wrong person. They politely apologized for the mistake and took it back,” an official at Park’s office said.

“Working-level officials from both sides examined the gifts to be exchanged between the two leaders yesterday. But the Chinese side wanted its gift to be unveiled on the day of their meeting because it is a surprise gift,” the official said.

Park presented Ma with a gift of traditional craftwork and photos of Seoul.

Ma and his Chinese delegation are separately planning to have a meeting with the governor of Gyeonggi Province, which surrounds Seoul.

Park and Lee, both belonging to the ruling Democratic Party, are among a pack of South Korea’s prospective presidential candidates for the 2022 elections.

Lee and Park were the preferred choices of 7.1 percent and 5.9 percent of respondents, respectively, in a recent poll of prospective presidential candidates. The poll was led by Hwang Kyo-ahn, chairman of the main opposition Liberty Korea Party, who secured 21.2 percent.