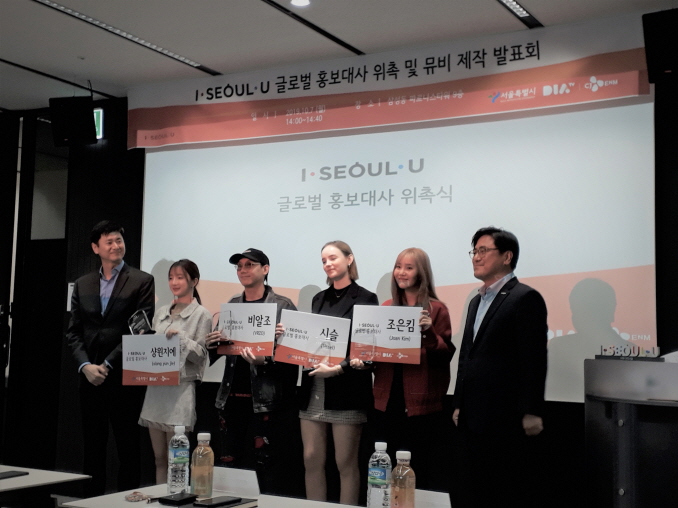 Four of the five foreign social media influencers (from left: Xiang Yunjie, VRZO, Sissel and Joan Kim) appointed by the city government as its new public relations ambassadors pose for photos along with city officials during an appointment ceremony in Seoul on Oct. 7, 2019. (image: Seoul Metropolitan Government)

The online stars will promote the South Korean capital overseas on their highly popular YouTube, Instagram and other social media pages for one year.

The new envoys include VRZO, a Thai entertainment and game content creator running a YouTube page with 6.02 million subscribers, and China’s Xiang Yunjie, who offers Korean beauty and lifestyle content on her YouTube channel with 1.99 million subscribers.

The three others are Vietnam’s Trang Ngo, Korean-American YouTuber Joan Kim and Denmark’s Sissel, who runs YouTube sites specializing in fashion, makeup and skin care with 1.1 million, 550,000, and 460,000 subscribers, respectively.

They appear in Seoul’s PR video set at the city’s major tourist attractions.

The video comes in two versions — a 15-second piece to be shown on about 1,000 screens in the United States, China, Turkey, Vietnam, Indonesia and Myanmar from Oct. 15-29 and a 90-second video to be featured on the influencers’ social media channels.

The government expects the video to reach about 2.52 million moviegoers and hit more than 200 million views online.

“We are going to promote Seoul and Seoul’s brand across the world through the five influencers with hundreds of thousands of, millions of subscribers,” said Park Jin-young, a city official in charge of the project.

“The video featuring them will be screened in overseas theaters and delivered through their social media channels and play a significant role in promoting Seoul’s dignity and charm,” the official said.