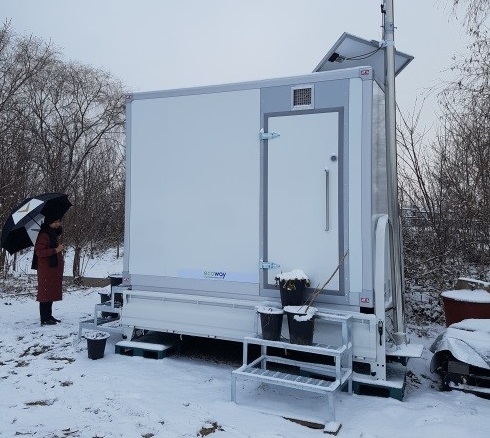 The research team created a new toilet design to allow flushing human excrement without using water, and installed a mechanism that separates urine and feces, each of which can be used as different types of fertilizers. (image: Seoul National University)

Prof. Han Moo-young and his research team at SNU’s Department of Civil and Environmental Engineering designed the Tori restroom, which automatically recycles human waste into fertilizer without requiring any water.

Tori, a Korean term for ‘benefiting the earth,’ received the Innovation Award at the 1st World Summit on Leaving No One Behind, hosted by the World Intellectual Property Organization.

Flush toilets are commonly known to use a large amount of water in the flushing process, which has led to various issues including water shortages and contamination.

Han and his team studied ‘haeuso’, a Korean traditional toilet that uses human waste as fertilizer.

The team created a new toilet design to allow flushing human excrement without using water, and installed a mechanism that separates urine and feces, each of which can be used as different types of fertilizers.

The research team also implemented a system where automatic signals are sent out when the toilets are filled with waste, or when there are strong odors, to keep the toilets clean at all times.

Solar panels and wind power generators have been placed outside of the restroom to create a private power station for the maintenance and operation of the restroom, and a rain collecting device that can help reduce the usage of water was also included.

The first Tori restroom will be installed at Noeul Park in Mapo District, Seoul as part of a pilot project.