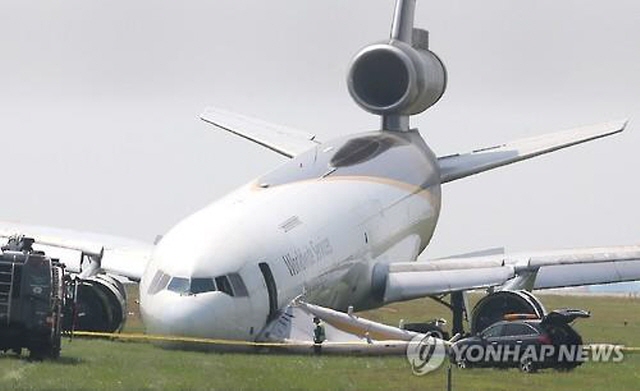 The U.S. cargo plane operated by United Parcel Service of America nosed into the ground after skidding off a runway at Incheon International Airport on June 6, 2016. (image: Yonhap)

SEOUL, Jun. 7 (Korea Bizwire) — A U.S. cargo plane operated by United Parcel Service of America skidded off a runway at the main gateway to South Korea due to a breakdown in the landing gear. No casualties were reported, the aviation authorities here said Tuesday.

Flight 5X61 bound for Anchorage in the United States was about to take off at Incheon International Airport at 10:48 p.m. on Monday, but instead rolled off the runway, according to the state-run airport operator.

Five crew members, including one pilot, safely escaped from the aircraft, it added.

The plane is currently still at the foot of the runway, which has been closed for nearly a day, while two other tracks operate as usual, it said.

The Ministry of Land, Infrastructure and Transport said it has launched an official probe into the cause of the incident.

“An investigation panel is inspecting the case, and a separate government-led team is preparing to tow the damaged aircraft,” the ministry said in a release. “It will take three months to restore the airport facilities damaged from the accident.”

Fourteen aerial lights and six localizer antennas on the runway were broken due to the crash, it noted.’