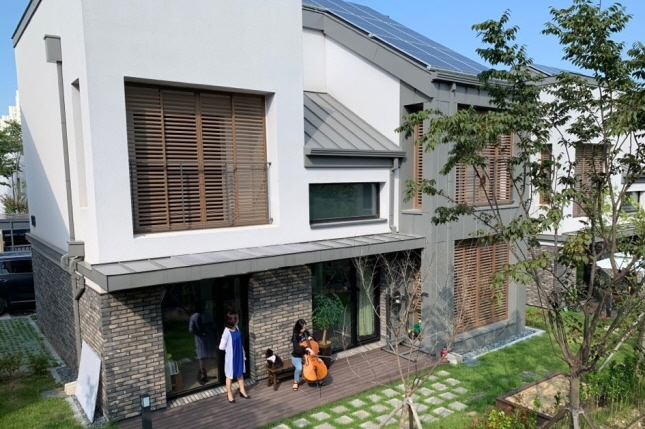 Cho Yeoun-hoa (L) looks at her daughter Kang Ye-beum playing the cello in the backyard of their solar panel house in Sejong City, an administrative hub 130 kilometers southeast of Seoul on Sept. 29, 2019, with their pet cat sitting on the bench. (Yonhap)

SEJONG, Oct. 4 (Korea Bizwire) — After looking for a perfect place for her family for years, Cho Yeoun-hoa and her family moved in April from an apartment where her daughter couldn’t play the cello at night to a stand-alone house in the country’s administrative city of Sejong that also happened to be solar-powered.

The 47-year-old housewife-turned-salary worker had read about generating electricity using solar panels on the roof of a house in articles but wasn’t previously interested in the concept.

Now she is an evangelist for solar houses, recommending to friends that they join her.

“I lived in an apartment for the past 23 years. It’s only six months since I moved here, but I came to realize that solar energy not only helps cut energy costs but also makes me feel I’m doing the right thing for the environment,” Cho said in a recent interview with Yonhap News Agency.

The solar-powered RoRen House complex to which the Cho family and 59 other households have moved since February was built by a government consortium led by the Ministry of Land, Infrastructure and Transport and Korea Land & Housing Corp.

RoRen House, which stands for “zeRO energy” and “RENtal house,” is the country’s first “zero-energy housing pilot complex” at this administrative hub 130 kilometers southeast of Seoul.

Among other advantages, residents are satisfied with low rental fees and maintenance costs.

“RoRen House residents say rental costs are acceptable given the quality of life they enjoy here. They say they can save on electricity charges by up to 80,000 won per month during the summer as they use electricity generated from solar panels on their rooftops,” he said.

RoRen House in Sejong City (L) and the housing complex manager Lim Jin-young indicating equipment that shows how much electricity is generated on a daily basis. (Yonhap)

Advanced countries such as the United States and Europe are increasingly introducing zero-energy buildings to seek energy efficiency and cut greenhouse gas emissions.

But they focus on providing more energy-efficient homes, without making such homes obligatory.

“South Korea is the only country that makes it mandatory to install power-generating systems for public and private buildings that will be built from 2020,” Kim Yong-soo, deputy director of the Green Architecture Division at the infrastructure ministry, told Yonhap.

Starting next year, the government plans to kick off its broader zero-energy building campaign.

Most public buildings that have a gross floor area of over 1,000 square meters are required to generate some of the electricity they use from solar panels or other alternative energy sources from 2020.

Public-sector buildings with a gross floor area of more than 500 square meters, private-sector ones with an area of 1,000 square meters and apartment complexes composed of over 30 households will be subject to the zero-energy building program from 2025, according to the ministry.

From 2030, most buildings with an area of over 500 square meters in both the public and private sector will be placed under the obligatory program, it said.

As for existing buildings, the government will also recommend that owners replace older insulation materials and windows with highly efficient ones and will help them take bank loans at lower rates.

The government’s broad zero-energy building plan is in line with the Paris climate agreement that took effect in November 2016.

Under the agreement, South Korea set a target to reduce greenhouse gas emissions by 37 percent from business-as-usual levels by 2030.

Korea is expected to emit 8.51 million ton of carbon dioxide in 2030 unless the country takes action to reduce greenhouse gas emissions.

It aims to reduce CO2 emissions to 5.36 million tons that year through preemptive efforts to cut emissions. 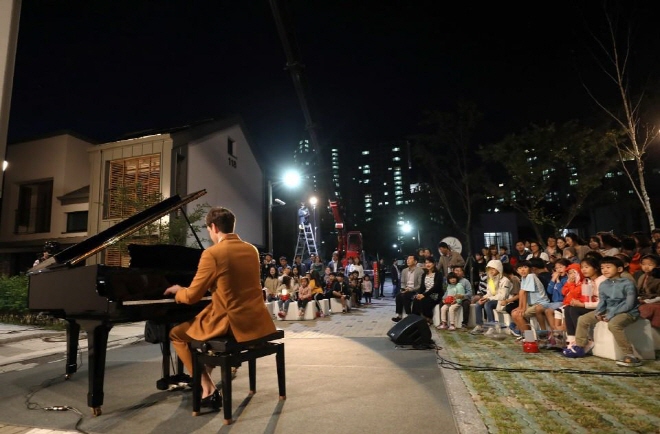 In the latest event to promote its plan, the government held the “Zero Energy Recital” at RoRen House on Sept. 23.

In the musical performance, all the event equipment, including sound, lighting and the stage, were powered with electricity generated within the complex.

Daniel Lindemann, a 34-year-old German native and entertainer, played the piano in the form of “talent donation,” and Cho’s 16-year-old daughter Kang Ye-beum played the cello for the audience.

“Germany has been a front-runner in addressing climate change. The country is in the process of transitioning to a low-carbon, nuclear-free economy by mid-century,” Lindemann said.

He gave the example of the German city of Freiburg to explain how popular energy-generating homes are among Germans.

“In Freiburg, solar-powered households do not emit carbon dioxide and generate energy through bio-gas facilities, and residents prefer to use trams and bicycles. Populations in many German cities are on the decrease, but the population in Freiburg is increasing due to ‘plus energy’ homes that produce more energy than they consume,” he said.

In the early 2000s, Germany made a massive investment in renewable energy, which helped to revolutionize the entire housing industry.

Renewable energy only accounted for 3.5 percent of Germany’s power in 1990, but in 2018, 35 percent of the country’s power came from solar, wind and other renewable sources.

In Korea, solar energy is becoming more familiar among today’s homeowners as people have become increasingly interested in the environment and come to look for ways to install solar panels.

Declining prices for solar panel systems and government subsidies are also catalysts that will drive up demand for residential solar installation across the country.

“Even if the government changes, the zero-energy building program will remain unscathed as it is pushed forward in line with the Paris climate agreement,” said Kim Sang-moon, director-general for the Architecture Policy Bureau at the ministry.