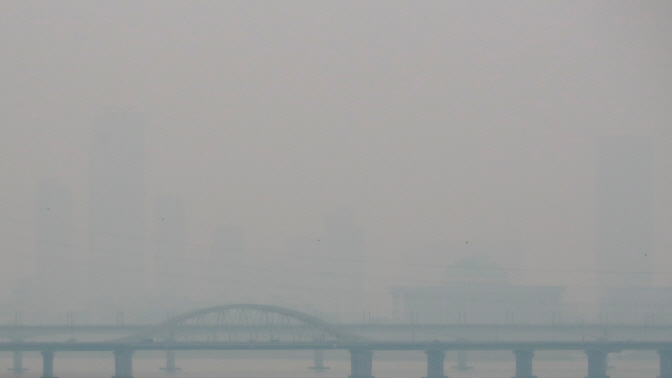 SEOUL, Mar. 28 (Korea Bizwire) — South Korea is about to set up a national organization to address one of its most pressing issues that is considered new but has been around for hundreds or thousands of years — dust coming from China.

South Korea is seeing a clear increase in both the density and frequency of fine dust.

Many believe the rather sudden increase may come from China’s rapid industrialization that has evidently led to a rise in its use of fuel for power and cars, both thought to be key sources of particulate matter.

China, however, refuses to recognize the outcome of any scientific research showing the relevance.

The Chinese official instead questioned whether Kang had any scientific proof.

For most South Koreans there is no need for scientific evidence to pin down the source of air pollutants to China.

“For as long as I remember, we have had yellow dust coming from China,” Kim Hee-jo, a 42-year-old resident in Seoul, said.

“I wonder how it is possible (for China) to recognize yellow dust blowing from China to South Korea but not fine dust,” he added.

When the density and frequency of yellow dust began to increase due to its desertification some 20 years ago, China had even accepted Seoul’s support for its afforestation efforts.

“Saying the westerly winds carry heavy sandy particles but not microscopic nano materials is just like saying that waves may move rocks but not a piece of paper floating in the water,” a government official here said on condition of anonymity, citing the sensitivity of the issue. 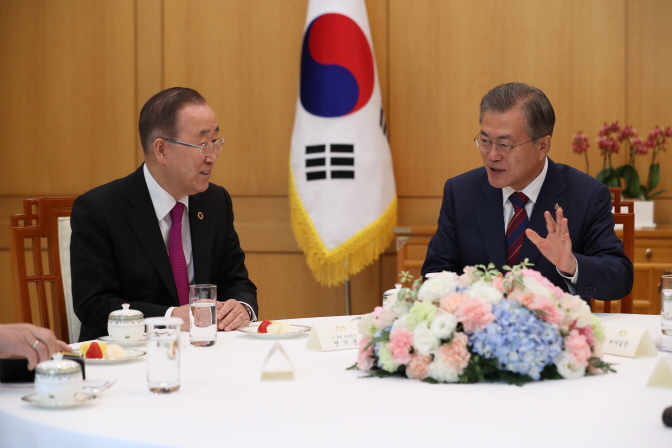 South Korean President Moon Jae-in (R) speaks with former U.N. Secretary-General Ban Ki-moon in a meeting held at his office Cheong Wa Dae in Seoul on March 21, 2019, where he asked the former U.N. chief to chair a new government committee to tackle the issue of fine dust. (Yonhap)

South Korean President Moon Jae-in, on the other hand, says none of that matters right now.

Moon says both China and South Korea will benefit by working together and reducing fine dust instead of quarreling over who is to blame.

“The Chinese side claims our dust flies to China’s Shanghai, so creating artificial rain over the West Sea will be helpful to the Chinese side too,” the president said earlier in a meeting with his top presidential secretaries, ordering his government to look into the possibility of a joint project with China to create an artificial wall of rain between the two countries when necessary.

He has also highlighted the need for regional efforts to address the apparently pressing issue for all countries in the region, appointing the former South Korean chief of the United Nations and his political rival, Ban Ki-moon, as the head of the new government organization on fine dust.

The former secretary-general of the United Nations was one of Moon’s key contenders in the 2017 presidential election. He is now considered the right person to induce countries in the region to work together.

“Cooperation and joint efforts are very important, especially with Northeast Asian countries, such as China,” Ban told reporters shortly after meeting with Moon last Thursday to accept his new job.

Later, Ban said it was unnecessary and “undesirable” to even debate who is more responsible for the regional issue.

“Instead of engaging in a war of words and blaming China for fine dust, we must first step up our own efforts to reduce fine dust,” he said in a meeting with local journalists this week.

Local manufacturers of air purifiers are already reporting a surge in sales, with their sales more than tripling in some areas in the first two months of the year.

Sales of dryers are also on the rise with more people unable to hang their laundry to dry outside, according to industry observers.

A market report has predicted more than 3 million units of air purifiers will be sold in the South Korean market this year, surpassing the estimated sales of 2.2 million television sets.