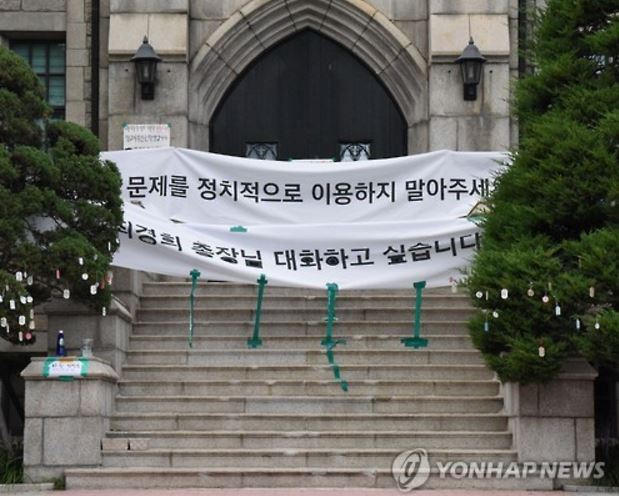 However, the violent protest and the choice of students to lock in professors and staff and damage a statue of the school founder go beyond what is acceptable, and students must be held accountable for their insolent actions. (image: Yonhap)

Ewha Womans University has long been known for its reputation as the largest and most prestigious women’s university in Korea. As many students and alumni of Ewha take pride in their alma mater, the movie quote soon became a catchphrase among women who want to show that they are intelligent and competent, and that they deserve to be treated with respect.

However, some say that ‘Ewha’ pride has taken a step too far.

Hundreds of students and alumni have been occupying the main building on the Ewha University campus for the past six days, protesting against a recent decision from the university’s administration. Students taking part in the sit-in blocked the entrance to the main building and locked in five professors and staff who were finally released 46 hours later with help from the police department.

The protest began on July 28, when the school rejected a request from the student body to terminate a plan to establish a continuing education program called ‘Light Up Your Future at Ewha (LiFE) College’.

The LiFE College program was initiated by the Ministry of Education this year, and offers universities financial assistance to launch continuing education programs for anyone wishing to attend college long after graduating from high school. Ten schools across the country, including Ewha, were selected after having applied to participate in the program.

Although the university is describing the violent protest as inappropriate, some suggest that the failure of Ewha’s administration to discuss the matter with students and professors, who will be most affected by the decision, caused the fierce revolt.

The Ewha Womans University Professor’s Council stated that the university’s academic affairs office sent out the first and only email regarding the LiFE college launch just before the press covered the student protest.

On the other hand, academic factionalism – which often leads to school pride – is considered as the focal point of students and alumni protesting against the idea of creating a continuing education program at their institution. As alumni of a prestigious college, they refuse to accept that “less-qualified” people might have the same title as them – the chosen few who went to Ewha.

Because getting into a prestigious college in Korea and then finding a job has become increasingly difficult, the rage of these elite students is rather understandable to those who know the importance of the ‘Ewha alumni’ label.

However, the violent protest and the choice of students to lock in professors and staff and damage a statue of the school founder go beyond what is acceptable, and students must be held accountable for their insolent actions.

The LiFE College program is designed to offer a higher education opportunity for individuals seeking life-long learning, and the current university system in Korea cannot meet the demand for continuing education programs. As such, the Ministry of Education decided to launch separate programs at chosen universities.

Education experts point out that social trends are changing, and higher education institutions should transform their systems to accept different types of industrial and social demands such as continuing education. 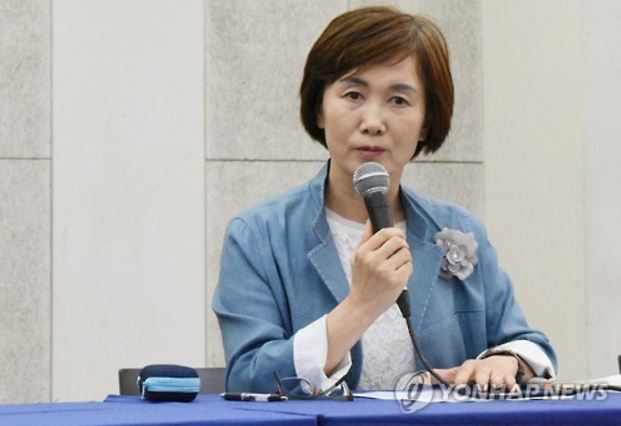 “We will halt the plan to establish a continuing education program at our university and reflect everyone’s opinion before making a final decision,” said Choi Kyung-hee, president of Ewha Womans University during a press conference on August 1.

Though President Choi may appear to be taking a conciliatory step back, she is still being criticized for her reluctance to ask for cooperation and understanding from faculty and students. During her press conference, Choi spent more time disparaging students’ rude behavior rather than showing her willingness to resolve the issue.

“Students must cease their violent actions and come forward to discuss the matter,” said Choi.

“The school administrators, who sparked the situation, have yet to make a sincere apology, and the president only publicly condemned students’ actions. Both the president and the dean of our school have abandoned their responsibilities and roles as leaders and teachers,” said the labor union of Ewha Womans University in an August 2 statement.