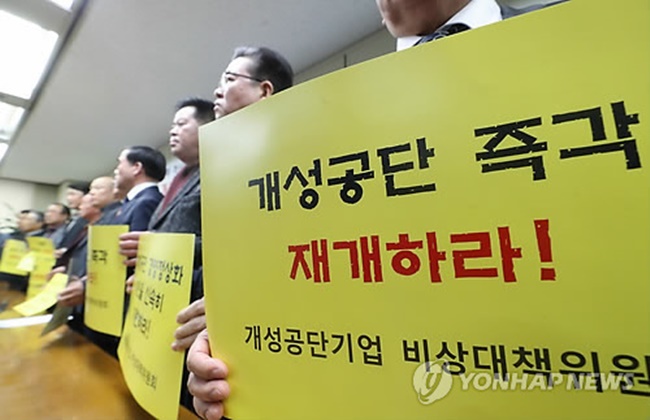 South Korea pulled the plug on the factory park in the North’s border city of Kaesong in February 2016 to punish the North for its fourth nuclear test and long-range rocket launch. (Image: Yonhap)

SEOUL, Dec. 29 (Korea Bizwire) – A private task force on Friday pressed the government to launch a probe into the shutdown of an inter-Korean joint factory park in North Korea.

South Korea pulled the plug on the factory park in the North’s border city of Kaesong in February 2016 to punish the North for its fourth nuclear test and long-range rocket launch.

On Thursday, a government panel said ousted former conservative President Park Geun-hye issued a unilateral verbal order to shutter the park without discussions or consultations at the official decision-making level.

The task force — which speaks for all 123 South Korean firms that had operated factories in the factory park — said Park and two former top officials should be subject to a probe, and called on the government to offer an apology for the shutdown.

Lee Eugene, vice spokesperson at the Unification Ministry handling inter-Korean affairs, said in a briefing that the ministry had no plan to request an investigation.

Shin Han-yong, head of the task force, asked the government to make every effort to resume the Kaesong Industrial Complex.

“We would like go to Kaesong,” Shin and 10 other businessmen chanted in a news conference in western Seoul as they held a yellow placard that read, “Immediately resume operations at the Kaesong Industrial Complex.”

South Korea has said the resumption of the factory park would hinge on progress in the resolution of the North Korean nuclear and missile programs.

The call for the resumption came as the international community has stepped up sanctions to cut off sources of hard currency for Pyongyang. U.N. sanctions ban transfers of bulk cash to Pyongyang.

In Washington, the State Department said the U.S. supports the 2016 decision to shut down the Kaesong Complex in the face of North Korea’s destabilizing and provocative actions, according to Voice of America.

In 2016, South Korea said the shutdown of the factory park was meant to keep money generated by the industrial park from going to Pyongyang’s nuclear and missile development.

The panel, set up to review the previous conservative governments’ North Korea policies, said Thursday that there is not sufficient information or evidence to support the claim that funds from the complex had been used to build weapons.

Han also asked the government to compensate the companies that have factories in Kaesong for the losses they suffered and provide assistance to help normalize their business operations.

The South Korean firms claimed that the closure has incurred about 1.5 trillion won (US$1.4 billion) in losses, but the government estimated their losses to be 786 billion won.

South Korea has decided to offer an additional 66 billion won in funds to the companies that invested in the factory park in addition to the previous government assistance of 517.3 billion won.

The industrial enclave — opened in 2004 — had been hailed as a key symbol of economic cooperation between the rival Koreas as it combined South Korean capital and technology with cheap labor from North Korea.