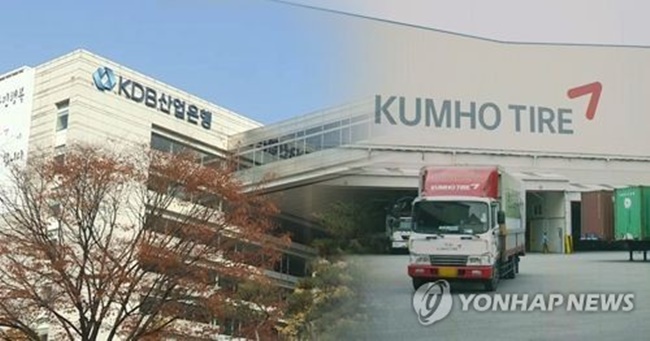 The move laid bare the growing divisions in South Korea’s second-largest tiremaker over how to resolve the current difficulties stemming from mounting losses. (Image: Yonhap)

The move laid bare the growing divisions in South Korea’s second-largest tiremaker over how to resolve the current difficulties stemming from mounting losses.

The fate of Kumho Tire was thrown into uncertainty after a deal to sell a majority stake in the tiremaker to Qingdao Doublestar Co. collapsed last September over price differences and other issues.

The tiremaker was again given the option of accepting Doublestar’s investment proposals by the end of this month or find itself placed under a court receivership, according to creditors.

Kumho Tire’s current value is estimated at 460 billion won (US$429.9 million), according to an accounting firm that conducted due diligence on the company.

The main creditor state-run Korea Development Bank has said the only option to turn the loss-making tiremaker around is to sell it to Doublestar, citing the Chinese firm’s comprehensive investment plan.

On Monday, KDB Chairman and CEO Lee Dong-gull met with union leaders at Kumho Tire’s plant in Gwangju, a city about 330 kilometers south of Seoul, but failed to make any progress.

“The labor union and creditor group concur on the current situation of business deterioration of Kumho Tire, but the two sides confirmed there is a wide difference on how to resolve this matter,” the union said in a news conference after a 90-minute closed door session with Lee.

The union said it cannot accept a sell-off to a foreign company by forcing what it claims is “a unilateral sacrifice of unionized workers.”

The 3,600-strong unionized workers will hold a general strike at all three domestic plants on Saturday after an eight-hour walkout from Tuesday toFriday by some 700 workers, said Ryoo Kwan-joong, a union official.

The three plants are located in the southern city of Gwangju, the southern rural county of Gokseong and Pyeongtaek, a city located 70 kilometers south of Seoul.

The workers laid down their tools in a general strike last week, costing the tiremaker 3.6 billion won in lost production, according to the company.

Meanwhile, the 1,500-strong office workers at Kumho Tire voiced their public support for attracting Chinese capital, saying that it is the only option left at this juncture.

“Attracting foreign capital is not the best option to safeguard our company, but we are in a situation in which we cannot oppose a foreign sell-off as the second-best option because there is no alternative,” the office workers said in a statement.

The white collar employees are not members of the union.

Doublestar has offered to invest 646.3 billion won in new Kumho Tire shares, which would allow the Chinese tiremaker to become the biggest shareholder, with a stake of 45 percent, and the KDB-led creditors to collectively own a 23.1 percent stake.

The Chinese company has also pledged to invest 200 billion won in the tiremaker’s production facilities while guaranteeing three years of job security for existing union workers.

Kumho Tire has eight plants — three in South Korea, three in China, one in Vietnam and one in the United States — which have a combined production capacity of 54.64 million tires.