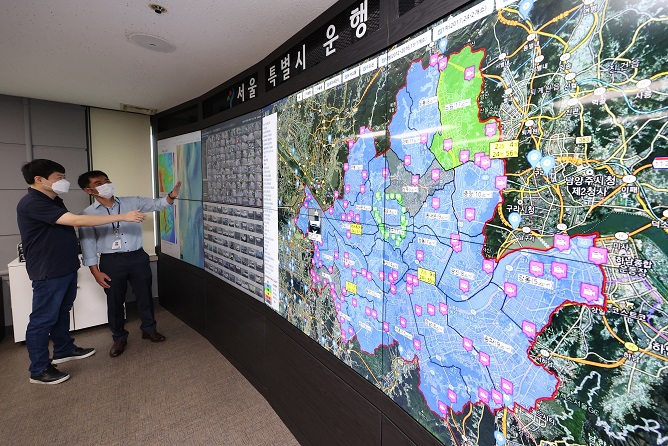 Officials check CCTVs at the traffic control center of the Seoul City Hall on Sept. 28, 2022, when the city government announced steps to further restrict the entry of diesel vehicles into downtown Seoul starting 2025 in order to cut air pollutants. (Yonhap)

Mayor Oh Se-hoon announced the measure as part of a broader air quality improvement project aimed at reducing the ultra-fine particle density in downtown Seoul from 2021′s 20 micrograms per cubic meter to 13 by 2030.

Under the plan, diesel vehicles classified as Grade 4 in the country’s five-tier emissions standard will be restricted from the roads in the Jongno and Jung districts starting in 2025.

Grade 4 applies to vehicles that produce 0.5 gram or more of carbon monoxide per kilometer among other pollutants. Cars in that category, currently numbering 81,139 across Seoul, produce six times more fine dust than those by Grade 3 cars.

Currently, Grade 5 diesel vehicles are banned across Seoul from December-March and in the central Seoul areas throughout the year.

In 2030, the city plans to adopt a blanket ban on Grade 4 vehicles across Seoul, while all cars powered by internal combustion engines will be banned in central Seoul starting in 2035 and across the city in 2050, the mayor said.

The air pollution reduction project also includes turning all delivery motorcycles and trucks into electric by 2025 and 2026, respectively, Oh said.