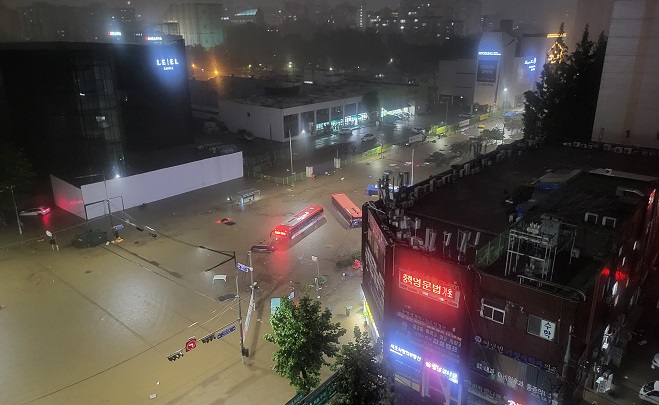 This photo provided by a news reader shows cars submerged in a flooded road near Seoul’s Gangnam subway station on Aug. 8, 2022. (Yonhap)

According to the measures announced by Mayor Oh Se-hoon on Wednesday, the city government will spend 1.5 trillion won (US$1.15 billion) over the next decade to build six large-scale rainwater storage and drainage facilities, also called deep underground tunnels.

The underground tunnel project calls for building large-scale drainpipes with a diameter of about 10 meters each at a depth of 40 to 50 meters underground.

The measures came after the heaviest downpours in 115 years battered the Seoul metropolitan area earlier this week, leaving at least 16 people dead or missing and more than 2,500 homes and buildings submerged.

A total of 525 mm of rain fell in Seoul from Monday to Wednesday morning, causing numerous flash floods throughout southern Seoul.

In the first phase of the anti-flood measures, the city government will build underground rainwater storage tunnels in three areas around Gangnam Station in Gangnam Ward, Dorim Stream in Gwanak Ward and Gwanghwamun in central Seoul by 2027.

In Gangnam Ward hit hardest by this week’s downpours, the underground tunnel will be designed to handle heavy rain of up to 110 mm per hour, the government added. The southern Seoul areas were hit by torrential rains of over 100 mm per hour this week.

The deep underground rainwater tunnel project was originally announced by Oh during his previous mayoral term in July 2011.

But the project was shelved due to budgetary issues after his successor Park Won-soon took office in October of the same year. Instead, Park’s government built only one of seven underground tunnels proposed by Oh in the southwestern Seoul district of Sinwol.

The Sinwol rainwater storage facility that can handle 95 to 100 mm of rain per hour and accommodate 320,000 tons of water was completed in May 2020. The area did not suffer serious flood damage this week.