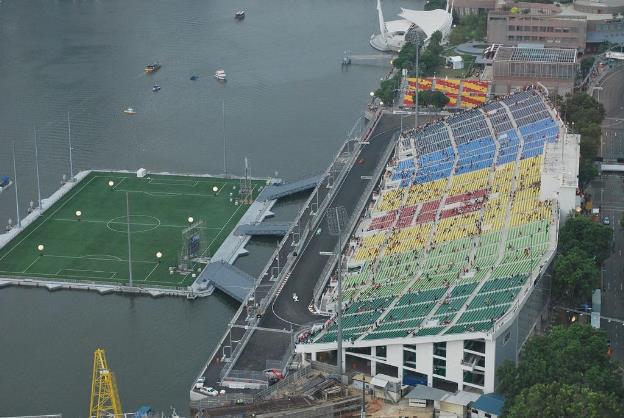 This photo from StadiumDB.com shows the Float at Marina Bay in Singapore.

SEOUL, Aug. 8 (Korea Bizwire) — The Seoul city government will push to create a number of sunset-viewing spots along the Han River to enhance the capital’s attractiveness as a tourist city, officials said Monday.

The sunset viewing facilities envisioned by the city government include a Ferris wheel tentatively named “Seoul Eye,” a combination of an art stage on the water and grandstand, and culture-themed pedestrian bridges, they said.

In particular, the Seoul Eye will be designed to be bigger than the Singapore Flyer, known as the world’s largest observation wheel that is 165 meters high and that up to 780 people can ride at the same time, they noted.

Seoul’s riverside art stage will be modeled after Singapore’s floating performance venue called The Float at Marina Bay, which features a 27,000-seat grandstand and a 120-by-83 meter steel platform.

It will be used for K-pop concerts, musical and opera performances and sports events, they added.

In case of Nodeul Island, an uninhabited artificial island in the Han River, an artistic roof-type sunset landmark will be created, the officials said.

The Great Sunset Project, part of the capital’s campaign to attract 30 million foreign tourists annually, was revealed by Seoul Mayor Oh Se-hoon during his visit to Singapore last week.

Municipal officials expect the sunset project to take four to 10 years to finish.