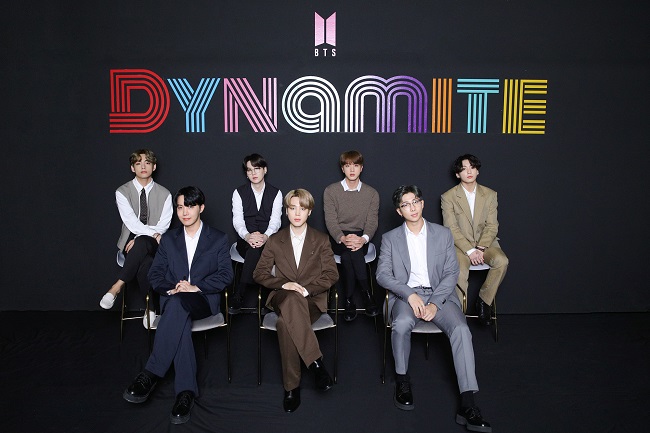 SEOUL, Dec. 4 (Korea Bizwire) — After a record-breaking 2020, BTS has ranked No. 1 on the Billboard’s year-end Top Artists Duo/Group chart for the first time in its career, the U.S. music publication reported.

“BTS is the first non-U.S act to be the year’s top duo/group since British/Irish boy band One Direction led in both 2015 and 2014,” the Billboard reported Thursday (U.S. time). It added that the band ranked No. 18 in the overall Top Artists chart.

BTS ranked second place on the chart in 2017, 2018 and 2019, when The Chainsmokers, Imagine Dragons and Jonas Brothers clinched the top spot, respectively.

The band’s disco-pop track “Dynamite,” which was the first song by a K-pop act to top the Billboard main singles chart, also made it on the year-end Hot 100, ranking No. 38.

In addition to the career-first No. 1 on the annual top artists duo/group chart, BTS scored another social media win by cementing its top spot on the Billboard’s year-end Social 50 for a fourth straight year.

“Its social engagement, as tracked by Next Big Sound, continued to soar over its competition, in some weeks doubling the amount of the chart’s No. 2.” 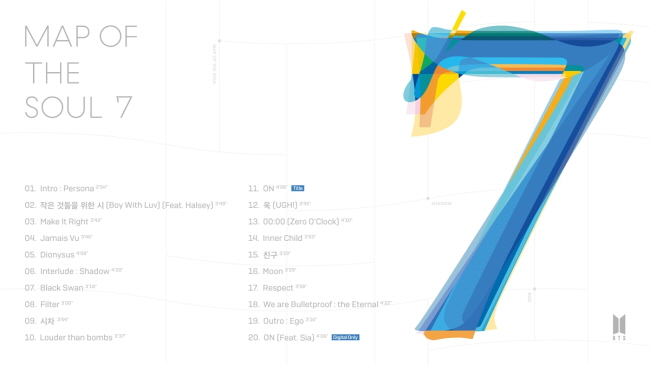 The tracklist of “Map of the Soul: 7.” (image: Big Hit Entertainment)

Apart from BTS, three other K-pop acts — EXO, NCT127 and Seventeen — were also among the top five on the Social 50.

The seven-piece band has had one of the best years in its seven-year career, scoring two No. 1 albums “Map of the Soul: 7″ and “BE” while claiming three No. 1s on the main singles chart, with “Dynamite,” “Savage Love (Laxed – Siren Beat)” and “Life Goes On.”

Among its chart-breaking songs released this year, “Life Goes On,” the lead track for “BE” that was released on Nov. 20, was seen as rewriting history as it became the first song that was mostly sung in Korean to top the Billboard.

The results for “Life Goes On” and “BE” were not included in the count for Billboard’s year-end tally, which factored in aggregated metrics on the weekly charts dated Nov. 23, 2019, through Nov. 14 this year.