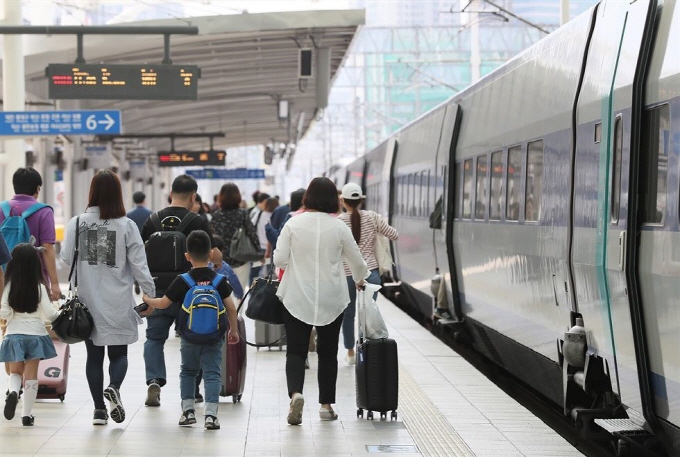 Hundreds of South Koreans arrive at Seoul Station on Sept. 21, 2018, to board a train bound for their hometown as the annual rush began of travelers heading to their hometowns and resort areas for the Chuseok holiday, the Korean equivalent of Thanksgiving. (Yonhap)

SEOUL, Sept. 2 (Korea Bizwire) — The operation hours of subways and some intracity buses in Seoul will be extended to 2 a.m. for two days during next week’s Chuseok holidays, the Korean equivalent of Thanksgiving, the metropolitan government said Monday.

Chuseok is celebrated on Aug. 15 in the lunar calendar, which falls on Sept. 13 this year, with the holidays running from Sept. 12-15.

According to a special transport policy measure announced by the Seoul Metropolitan Government, subway trains will run for an extra hour past their usual time of 1 a.m. from Sept. 13-14, while buses on 129 routes passing through Seoul Station, and four other major train stations and four major bus terminals, will also be extended to 2 a.m. during the two days.

The extension of subway and bus hours is intended to accommodate those returning to the capital after the Chuseok holidays and improve the safety and comfort of residents across the city.

In addition, the number of buses on express and inter-city bus routes will increase by 28 percent from Sept. 10-15 to better accommodate Seoul residents traveling to their hometowns or visiting relatives.

The operation hours of the bus-only lane on the Seoul-Busan expressway will be extended by four hours to 1 a.m. from Sept. 11-15.

Meanwhile, the municipal government said a total of 480 hospitals in Seoul will be ready to offer emergency medical services and 1,164 drugstores will remain open during the Chuseok holidays.