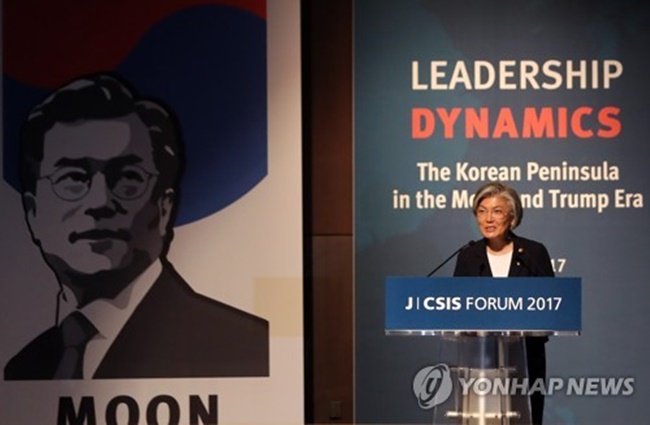 “As my president himself made it clear on numerous occasions, my government has no intention to basically reverse the commitments made in the spirit of the ROK-U.S. alliance,” Foreign Minister Kang Kyung-wha told a forum held in Seoul. (Image: Yonhap)

“As my president himself made it clear on numerous occasions, my government has no intention to basically reverse the commitments made in the spirit of the ROK-U.S. alliance,” Foreign Minister Kang Kyung-wha told a forum held in Seoul.

“Going through the environmental-impact assessment is an issue of domestic due process. It does not mean that we will cancel or reverse the decision to deploy THAAD,” she added.

The THAAD deployment has been suspended as President Moon Jae-in underlined the need for due process including a review on its environmental impact.

The move, however, sparked speculation that South Korea might be considering scrapping its deployment. The Seoul government has repeatedly denied that possibility.

“With democratic and procedural legitimacy obtained, we will strengthen public support for the deployment, which in turn will further strengthen the alliance in the future,” Kang said.

“The deployment of THAAD was an alliance decision, so we will, as alliance, continue to collaborate on the basis of mutual trust,” she noted.

In her recent conversation with U.S. Secretary of State Rex Tillerson, Kang also emphasized that the suspension is an “internal” step to ensure its democratic procedure and legitimacy.

Kang made the remarks before South Korean President Moon Jae-in is to meet his U.S. counterpart Donald Trump for the first time in Washington later this week.

In the forum, Kang also said that the situation surrounding South Korea has never been so “challenging,” adding that the upcoming summit will be a “milestone and a historic first step toward the peaceful future of the peninsula.”

She underlined the importance of the alliance with the U.S. in addressing the growing threats from North Korea.

“The ROK-U.S. alliance has been the foundation of our diplomacy and security and it will remain so in the future. As alliance partners, we will be closely consulting with each other as we design and implement the roadmap for peace and security on the Korean Peninsula,” the minister said.