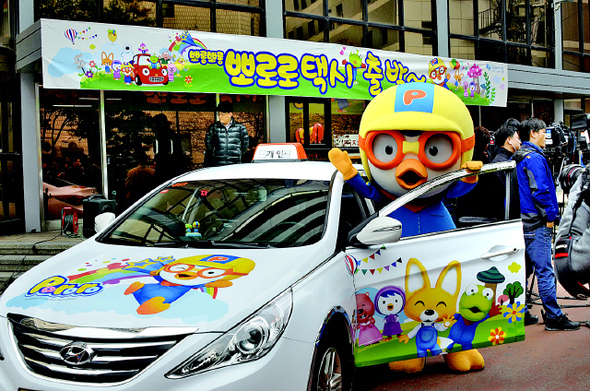 The Seoul city government modified 20 owner-driven taxis with images of the popular cartoon penguin Pororo, and has launched a pilot project that will continue until May next year. (image: Seoul Metropolitan Government)

SEOUL, Nov. 26 (Korea Bizwire) – Seoul taxi drivers are notorious for rejecting customers and driving aggressively. In order to dispel their bad reputation, Seoul Metropolitan Government has introduced “Pororo” taxis in an attempt to paint cabbies in a more friendly light.

The Seoul city government modified 20 owner-driven taxis with images of the popular cartoon penguin Pororo, and has launched a pilot project that will continue until May next year. “Pororo, the Little Penguin” is a much beloved animated cartoon series in Korea and abroad. Pororo has even been dubbed as the “president of children.”

From outer decorations to accessories inside the vehicles themselves, Pororo and his friends have taken over the taxis, giving much delight to passengers, especially children.

Passengers don’t need to pay extra fare for the specially decorated taxis, and those who would like to take a Pororo taxi should make an online reservation at Seoul’s public transportation reservation site (http://yeyak.seoul.go.kr/main.web) at least seven days prior to the service.

However, the services are not only based on reservations, and those who are lucky enough to spot one on the street can ride a Pororo cab like any other taxi in Seoul.

The city government will decide whether to keep the service running after reviewing responses from passengers and taxi drivers, once the pilot project has concluded.

An official at the Seoul city government said, “We expect that we can dispel the bad images of Seoul taxis thanks to Pororo cabs. We hope the taxis with Pororo decoration bring a little joy to everyday lives of our citizens.”

Meanwhile, Seoul Metropolitan Government is also trying to improve the “friendliness” of public transportation. Since March, the government has been running about 100 “Tayo” buses. With the campaign’s huge popularity, especially among children, the city government extended the operation of the special buses until the end of this year.

Also, the “Larva” cartoon character has found a new home, as it is decorated all over one of the trains on Seoul’s subway line two, giving pleasure to the passengers since its inception at the beginning of November.