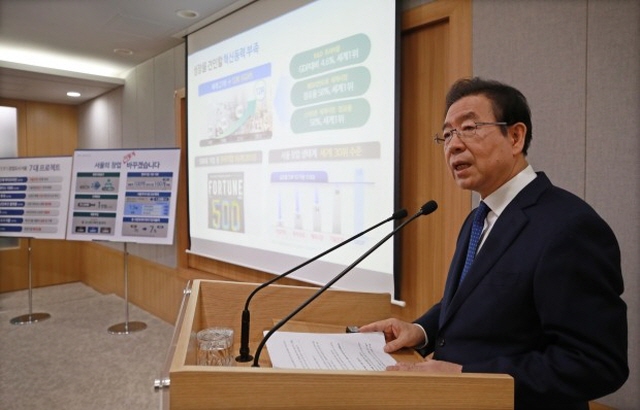 Seoul Mayor Park Won-soon announces a package of startup support measures in a news conference at his office on April 4, 2019. (Yonhap)

SEOUL, Apr. 4 (Korea Bizwire) — The mayor of Seoul said Thursday that his government will spend 1.9 trillion won (US$1.67 billion) by 2022 to develop the capital city into one of the world’s top five hubs for startup companies.

Mayor Park Won-soon announced the vision in a news conference, saying his government aims to foster more than 100 venture companies with annual sales of over 10 billion won over the next four years.

The Seoul government will also seek to increase the number of unicorn startup companies with a valuation of over 1 trillion won from the current seven to 15 in the period, Park said.

“My government will create a miracle of venture business in Seoul, following the miracle of the Han River,” Park said, vowing to extend full support to talented people with creative ideas for innovative products.

He said the new venture support measures will cover seven stages of the growth of startup companies, including their creation and inroads into the global market. Through such efforts, Park said he will raise Seoul’s global ranking in terms of startup ecosystem from the current 30th to fifth place by 2022.

By then, the share of startup companies in the city’s total corporate sales will rise from 3 percent to 7 percent, he stressed.

Park said his government will increase the number of office spaces for technology startups by 1,000 to about 2,200 and offer 79 billion won in loans to about 1,000 startup companies in need of seed money to make test products.