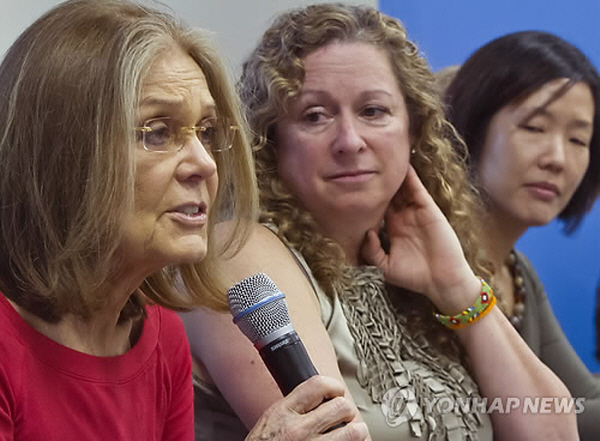 About 30 female activists from around the world, including U.S. activist Gloria Steinem, plan to march from the North to the South across the DMZ. (image: Yonhap)

SEOUL, Apr. 16 (Korea Bizwire) — South Korea expressed concerns Thursday that a campaign by dozens of foreign activists to walk across the heavily fortified inter-Korean border will increase tensions on the peninsula.

About 30 female activists from around the world, including U.S. activist Gloria Steinem and Nobel Peace Prize laureate Mairead Maguire from Ireland, plan to march from the North to the South across the Demilitarized Zone (DMZ) that bisects the two Koreas to mark the May 24 International Women’s Day for Peace and Disarmament.

They said the purpose of the DMZ crossing is to express hope that Korean families separated by the 1950-53 Korean War will be united someday and military tension between the two Koreas can be reduced. They also hope to ultimately end the division and replace the 1953 Armistice Agreement with a permanent peace treaty.

Seoul’s unification ministry said that the planned event should be made in a way not to spark unintended tension on the Korean Peninsula, raising concerns that it could be politicized by the North.

“We are well aware of what the event is aimed at promoting, and we plan to provide support if needed,” said an official at Seoul’s unification ministry, asking not to be named.

“But Seoul believes that such events should be held in a way that doesn’t spark tension on the peninsula or can’t be politicized,” he added.

The official said the Korean government has not received an official request from the activists about the DMZ crossing.

Crossing the inter-Korean border requires approval from the United Nations Command and the governments of the two Koreas.

The U.S. on Monday advised those activists not to travel to the North, saying that the safety and welfare of U.S. citizens abroad are the government’s top priorities.

Several U.S. research institutes said that the activists’ plan is for a good purpose — promoting peace on the peninsula — but the move will not help resolve North Korea’s pressing problems of nuclear weapons and poor human rights.