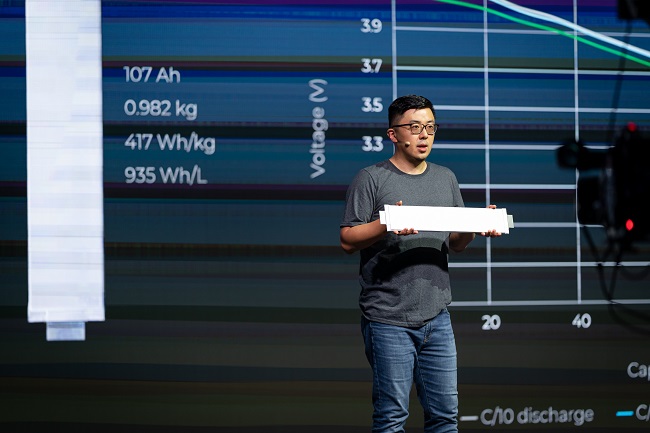 The 107 amp-hour “Apollo,” showcased at a virtual event, has an energy density of 417 watt-hour per kilogram, about three times higher than that of the average in a lithium-ion battery widely used in electric vehicles, SES said.

The battery, the largest ever, weighs less than a kilogram and can be charged from 10 percent to 90 percent in about 12 minutes.

It marks a milestone in the hybrid lithium-metal technology, as it is the first time a lithium-metal battery with more than 100 amp-hour has been presented to the market, the company said.

“We’re very excited about this, and we’re working with several partner companies to basically put this battery into actual vehicles,” Qichao Hu, founder and CEO of the SES, said during the virtual session.

SES, formerly known as SolidEnergy Systems, has received investments from SK, Hyundai, Temasek and other investors since it was founded in 2012.

SK Inc., the holding company of South Korea’s No. 3 conglomerate SK Group, holds a major stake in the battery developer.

Hyundai has invested US$100 million and is working with SES on the joint development of the lithium-metal battery technologies.

SES also announced it was building a lithium-metal factory in Shanghai for pilot production, with the construction to be completed in 2023. Hu said he plans to set up a pilot production line in South Korea as well, without providing more details.

Lithium-metal batteries use metal, instead of graphite, which enhances the energy density by about 30 percent compared with lithium-ion batteries. But they are still way off from mass production and more prone to catch fire.

SES’ “hybrid” lithium-metal battery has its strength, as it has high energy density and reduced fire risks from the application of enhanced coating on the metal and its unique electrolyte, according to the company.

SES plans to introduce the test sample of the lithium-metal battery jointly developed with Hyundai and General Motors Co. within next year.