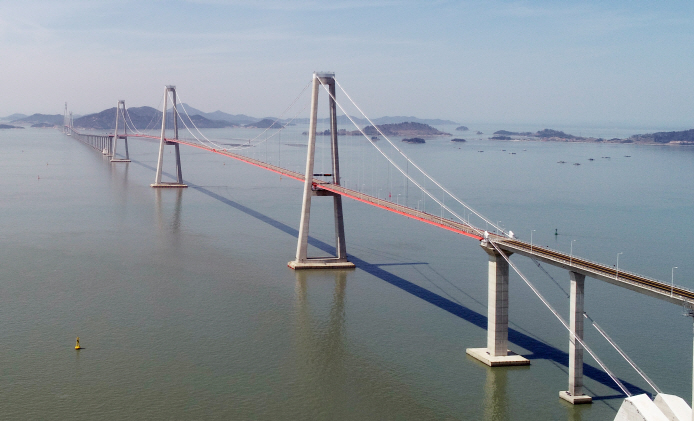 SINAN, Apr. 5 (Korea Bizwire) — The opening ceremony of the 10.8-kilometer-long Cheonsa Bridge connecting Aphae Island and Amtae Island in Sinan County, South Jeolla Province, was held on Thursday at the reclaimed land area near the bridge.

It is the fourth longest bridge in South Korea with a maximum height of 195 meters, and is the only bridge in Korea that features both a cable-stayed girder bridge and suspension bridge construction.

The decision to move forward with the bridge project took into consideration convenience for tourists as well as residents of the four islands, 9,181 residents in total.

It would have taken more than an hour to reach the mainland by boat, or it would have normally taken two to three hours to reach Mokpo without the Cheonsa Bridge.

The name, Cheonsa (mean 1,004 or angel), was decided through public consultation with local residents. It reflected the characteristics of the Sinan region, which consists of 1,004 islands.

The bridge is expected to revitalize the local tourism industry and the economy.

Authorities are also devising measures to maximize economic benefits by enhancing the synergy effect of the opening of the Cheonsa Bridge and the Mokpo Maritime Cable Car.