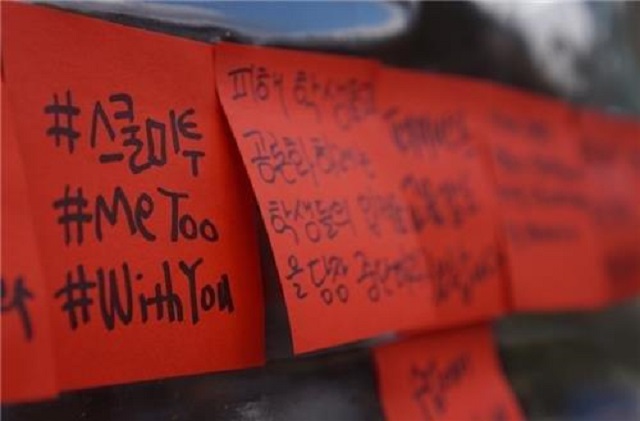 This file image, captured from a Twitter account on Oct. 29, 2018, shows post-it notes that call for the Seoul Metropolitan Office of Education’s efforts to resolve sex crimes at schools. (Yonhap)

SEJONG, June 15 (Korea Bizwire) — Teachers punished for sexual misconduct will be banned from becoming homeroom teachers for a maximum of 10 years, the education ministry said Tuesday.

According to the ministry, the Cabinet approved revised enforcement decrees of the Educational Officials Act and the Private School Act to enhance students’ safety and prevent secondary damage from sex-related crimes at school.

Under the revision, teachers who have been dismissed or expelled from their posts due to sex offenses, including sexual assault, crimes against minors, sex trafficking and sexual harassment, will be prohibited from getting assigned to homeroom classes for 10 years.

Those who have been demoted, suspended or reprimanded will face the same penalty for nine, seven and five years, respectively.

When the amendments take effect on June 23, an estimated 460 teachers will be put under corresponding measures nationwide, according to the ministry.

In recent years, sexual predation at schools has emerged as a major problem in South Korea, sparking a series of school #MeToo movements.

In February, a teacher at a girls’ high school in Seoul was sentenced to 1 1/2 years in prison for sexually harassing five of his students.

“The revised law aims to create a safe school environment for students by reducing the frequency of contact between students and teachers who have committed sex crimes,” the ministry said.

“We hope the teachers’ community takes this opportunity to work toward eradicating sexual predators at schools,” the ministry added.

Several teachers’ groups, however, called the upcoming measure a “privilege” rather than a penalty for problematic teachers as homeroom class management tends to require a heavier workload.