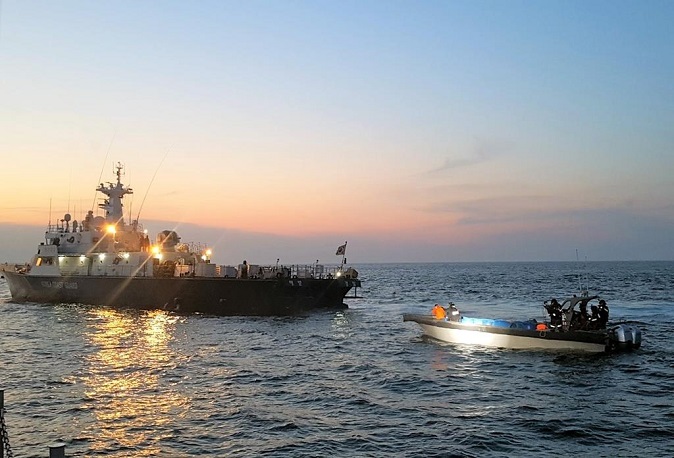 INCHEON, June 12 (Korea Bizwire) — The South Korean coast guard said Sunday that it has seized a Chinese speedboat for suspected illegal fishing in South Korean waters in the Yellow Sea.

The five-ton boat carrying two Chinese fishermen is suspected of trying to fish in waters about 35 kilometers west of South Korea’s western border island of Socheong at around 8 p.m. on Saturday.

The Chinese boat was fleeing to the north of the inter-Korean border before it was caught by a South Korean Navy 500-ton speedboat.

The Chinese fishermen did not comply with the coast guard’s order to stop, Han Sang-yoon, a Coast Guard official handling the case, told Yonhap News Agency.

Two Chinese nationals were taken in for questioning by South Korean Coast Guard officials at a pier in Incheon, Han said.

They could face charges of trespassing in areas near the western South Korean border islands and of not complying with the order to stop, which could carry fines of more than 10 million won (US$7,800).

Chinese fishing boats are allowed to enter South Korea’s western exclusive economic zone for fishing on the condition that they keep records of their activities and operate within limits. Still, areas near the South Korean border islands are off-limit to Chinese fishermen.

Last year, South Korea seized a total of 108 Chinese fishing boats in violation of due regulations. Of the total, 23 were caught for entering the zone without fishing permits, and most of the remaining cases were for underreporting fish catches.