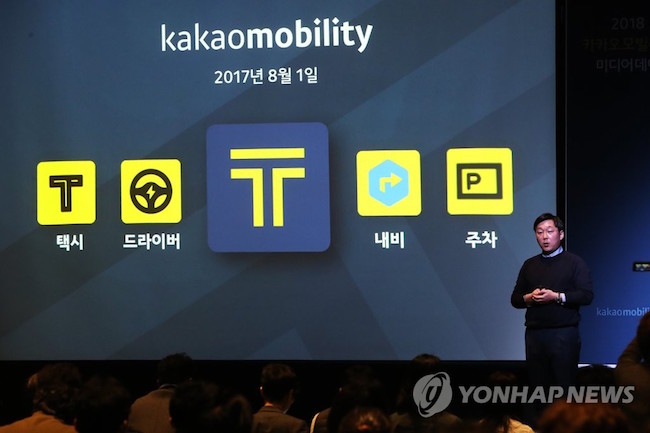 Speaking at the Seoul Plaza Hotel on March 13, Kakao Mobility CEO Jeong Joo-hwan said the Kakao subsidiary would introduce new features to Kakao T, its taxi-hailing app with 18 million users, that would make hailing a cab quicker in exchange for a commission fee. (Image: Yonhap)

The two features planned are “Advanced Call” and “Immediate Dispatch”. The former uses AI-integrated tools to call the cab with the highest probability of a successful match, while the latter scours the immediate vicinity and hails an empty taxi.

While Kakao T’s basic functions are free, these two new features will require payment of fees separate from the normal taxi fare. Immediate Dispatch, which boasts a faster taxi response rate, will be priced above the current market rate for taxi calling fees (1,000 won in the daytime, 2,000 won during late-night hours).

In response to concerns over legality – current laws bar additional fees from being levied on top of standard taxi fares – Jeong said fees demanded for the new services and the taxi fare itself had no relation whatsoever, adding that the Ministry of Land, Infrastructure and Transport had declared the process within legal grounds.

Kakao T, called Kakao Taxi in Korean, has logged over 400 million calls for taxis since its launch. (Image: Yonhap)

Kakao Mobility is also planning to link its recently acquired carpool startup Luxi with Kakao T. When Kakao T fails to locate any available taxis, the service will begin to search for carpools.

The grafting of the two transportation services was decided in recognition of the taxi shortages riders face. Over the past two years, the number of calls for taxis rose 2.5 times, but the population of active drivers rose by 1.4, resulting in an imbalance of supply and demand.

The Kakao T-Luxi collaboration is expected to be launched sometime before the end of June.

Entrance into foreign markets has also been pursued. Last December, Kakao Mobility invested in startup easi6 with the goal of providing South Koreans traveling to Hong Kong, Taiwan and Southeast Asia with a means of accessing local transportation.

And possibly starting the second half of this year, a partnership with JapanTaxi will make it possible for South Koreans visiting Japan to hail cabs using Kakao T, while Japanese visitors to South Korea would be able to do the same using JapanTaxi.