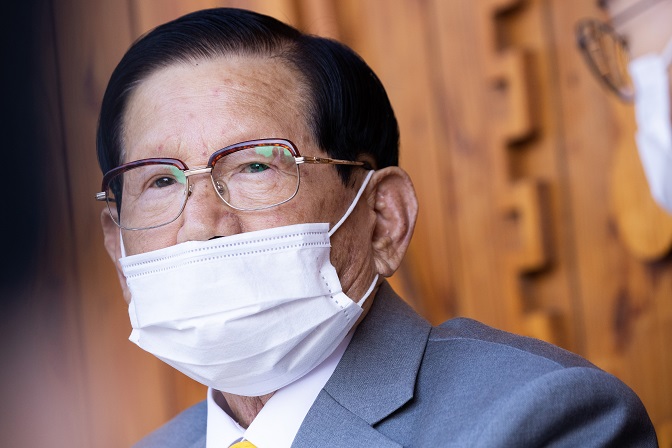 This file photo, taken March 2, 2020, shows Lee Man-hee, the founder of the Shincheonji Church of Jesus, holding a press conference in Gapyeong, east of Seoul. (Yonhap)

SUWON, Aug. 1 (Korea Bizwire) — The leader of a minor religious sect at the center of the early coronavirus outbreak in South Korea was arrested early Saturday for allegedly obstructing the government’s efforts to contain the spread of the pandemic.

A local court in Suwon, south of Seoul, issued an arrest warrant for Lee Man-hee, the founder of the Shincheonji Church of Jesus.

Lee, 89, is suspected of submitting false documents to health authorities on the number of participants at the sect’s gatherings and where the gatherings took place in February, when the fringe religious sect became a hot spot of the virus spread in the early phase of the COVID-19 outbreak in the country.

He is also accused of embezzling 5.6 billion won (US$4.68 million) from church funds and holding unauthorized religious events from 2015-19.

“There is some room for contention about the suspect’s alleged crimes, but some charges have been ascertained. Moreover, there have been circumstances indicating systematic attempts to destroy evidence. Considering his status, it cannot be ruled out that there will be similar attempts in the future,” said Judge Lee Myeong-chul.

The judge also noted that Lee is old and has chronic ailments but is not deemed unfit for imprisonment.

Prosecutors questioned him twice, on July 17 and 23, and filed for his arrest warrant Tuesday. The court held a hearing to review the request Friday.

Seven senior officials from the group’s headquarters were indicted on July 28 on charges including violation of the infectious disease control law and obstruction of justice. Three of them were arrested on July 8.

Shincheonji issued a statement later in the day, vowing all efforts to unveil the truth in upcoming court hearings.

“The court’s issuance of an arrest warrant doesn’t mean a guilty verdict. All possible efforts will be made to unveil the truth in the upcoming court trials,” the statement said.

It also argued that Shincheonji had never attempted to interfere with authorities’ quarantine efforts, saying it had only expressed concerns about authorities’ excessive demand for personal information of its followers.

Some 4,000 followers, most of whom were from its branch in the southeastern city of Daegu, were infected with the coronavirus.

South Korea’s COVID-19 caseload increased by 31 to 14,336 on Saturday, according to the Korea Centers for Disease Control and Prevention (KCDC). More than 5,000 of them are infections associated with Shincheonji.