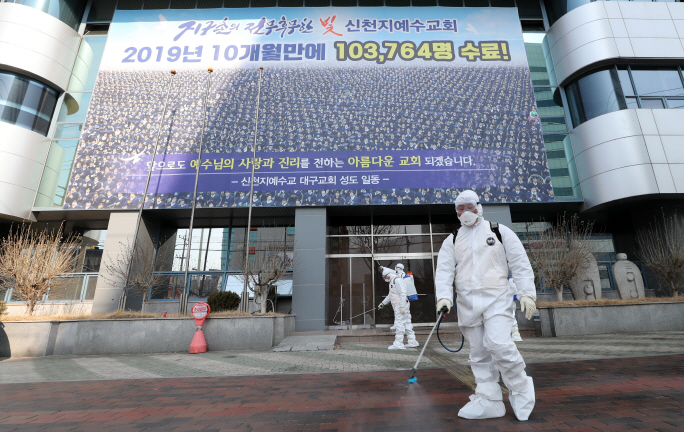 SEOUL, Feb. 21 (Korea Bizwire) — A homegrown religious group is drawing a growing spotlight and suspicion as a hotbed for coronavirus outbreaks, as more than half of the nation’s confirmed cases are traced to its worshipers.

The Korea Center for Disease Control and Prevention (KCDC) said Friday that 98 of the country’s 156 confirmed cases of the COVID-19 virus are linked to members of the group, which goes by the name of Shincheonji Church of Jesus, Temple of the Tabernacle of the Testimony, and people who came into contact with them.

The quarantine authorities are paying attention to the nation’s 31st patient, identified only as a 61-year-old woman who tested positive for the new coronavirus on Tuesday.

Patient No. 31, a Shincheonji follower, reportedly visited the Daegu church four times in total before and after she felt symptoms of the coronavirus infection.

Daegu, a metropolis of 2.4 million people about 300 kilometers southeast of Seoul, and the surrounding North Gyeongsang Province had remained free from coronavirus infection until patient No. 31′s case was announced.

Since Tuesday, however, the Daegu-North Gyeongsang area has reported as many as 111 infections.

The region is known as a stronghold of the Shincheonji church, which was founded by South Korean man Lee Man-hee in 1984 and now claims to have more than 200,000 adherents globally.

Daegu’s municipal government estimated that some 1,000 people attended worship at the Daegu church with patient No. 31 on Feb. 9 and 16, whereas the church put the number at less than 500.

The Shincheonji church, which reportedly has 12 major branches nationwide, said recently that it will temporarily suspend its church services and gatherings, replacing them with online services. The Daegu branch was shut down Wednesday.

A former member of the Shincheonji church assumed that Shincheonji’s service practices may have amplified the spread of the coronavirus as all participants sit close together on their knees and sing songs with their arms around each others’ shoulders during services.

Daegu officials fear that the city may face a steep increase in community infections, as its second survey of 3,474 members of Shincheonji’s Daegu branch found that 409 of them have symptoms of the coronavirus.

Including numbers from the first survey of 1,001 church members, a total of 544 said they have symptoms. The city said 2,722 members reported no symptoms, with the remaining 343 remaining out of contact. 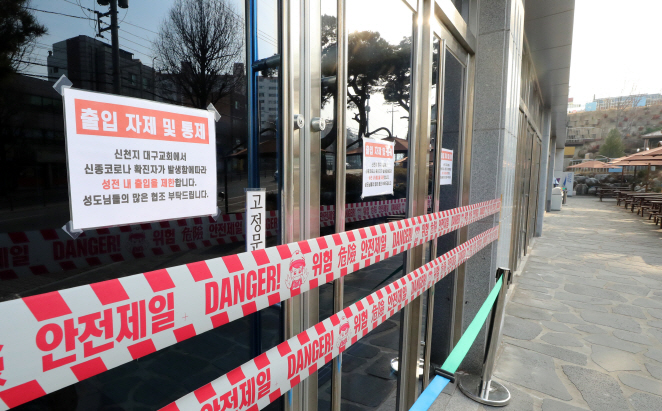 In Seoul, Mayor Park Won-soon announced the temporary closure of all religious facilities related to the Shincheonji church in the capital in an emergency briefing.

“The Seoul government will carry out quarantine and disinfection measures for all Shincheonji facilities in the city, regardless of the church’s own quarantine efforts,” Park said, asking all people who have recently visited Shincheonji’s Daegu church or been in contact with its followers to report to the authorities.

The government of Gyeonggi Province also announced that it will conduct an extensive survey on Shincheonji facilities in the province that surrounds Seoul for quarantine purposes.

It has confirmed 17 Shincheonji facilities in the province’s 15 cities and counties but suspects there are more than 100 unknown facilities that operate secretly for small-group gatherings and missionary work.

The health authorities suspect patient No. 31 is a super spreader but haven’t ruled out the possibility of the woman catching the virus elsewhere or from other members of the Shincheonji church, citing her mysterious visit to a hospital in Cheongdo, just south of Daegu.

Cheongdo is known as the birthplace of Shincheonji founder Lee.

A total of 19 confirmed cases, including the nation’s first death of a coronavirus patient, were reported in Cheongdo as of Friday morning.

The authorities suspect Cheongdo is the epicenter of the region’s coronavirus outbreaks, noting that a large number of followers attended the funeral of Lee’s elder brother held at the county’s Daenam Hospital from Jan. 31 to Feb. 2.