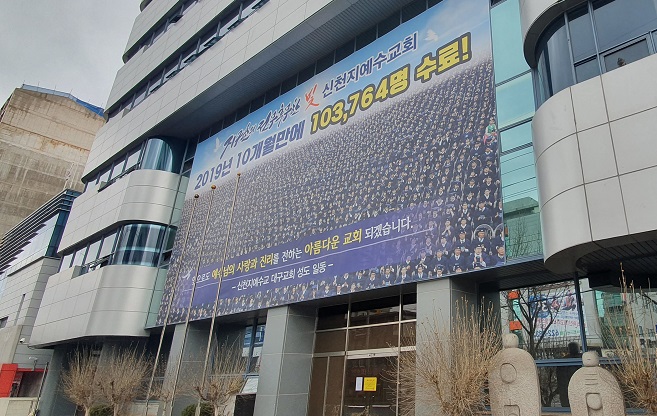 The Shincheonji Church of Jesus in Daegu, 300 kilometers southeast of Seoul, is firmly shuttered on March 10, 2020. (Yonhap)

SEOUL, June 23 (Korea Bizwire) — Shincheonji, a minor religious sect, said Tuesday that it will donate blood plasma of thousands of its congregants who have recovered from the novel coronavirus to support the development of a vaccine or drug to treat the virus.

“The government has helped us a lot, having our followers treated,” a Shincheonji official said. “Now we think it is time to do something. So we’ve decided to donate blood plasma of our recovered members.”

The church has already earned consent from those people, he added.

He said officials from the Korea Center for Disease Control and Prevention (KCDC) and local pharmaceutical firm Green Cross Corp. had meetings with church officials last week to discuss details.

The Shincheonji Church of Jesus was the center of the early phase of the COVID-19 outbreak in South Korea around February-March.

Some 4,000 followers, most of whom were from its branch in the southeastern city of Daegu, were infected with the coronavirus.

According to Green Cross, only 195 people had expressed their intention to donate blood plasma for the research as of 1 p.m. Tuesday. Out of them, 49 people already had their blood taken while 43 people were deemed inappropriate for donation.

But some argued that Shincheonji’s contribution is aimed at distracting from allegations that the sect provided false information on its membership to health authorities and hindered the government’s efforts to rein in the outbreak.

Two of its senior officials were arrested on such charges.

Shincheonji has been also under special tax probe by the National Tax Service for its founder Lee Man-hee’s tax evasion charges.

“We will sincerely face examinations by the prosecution and the tax agency,” the church official said. “We just want to support the development of a vaccine.”

South Korea had reported around 12,400 cases of the coronavirus as of Tuesday, and 42 percent, or 5,200, of those are linked to Shincheonji.