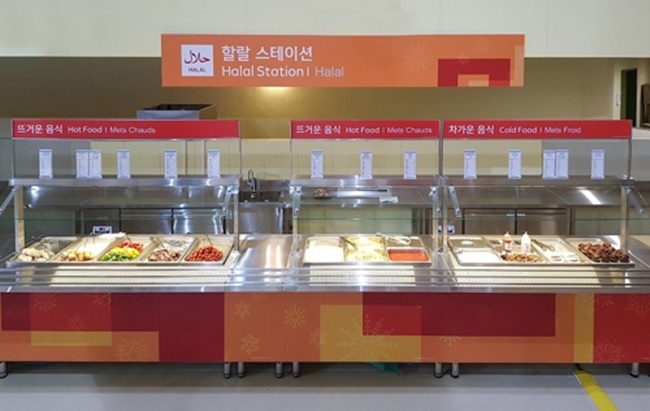 This undated photo, provided by Shinsegae Food Inc., the food manufacturer of retail giant Shinsegae, shows a halal food zone at a cafeteria it will run at the athletes’ village in PyeongChang, some 180 kilometers east of Seoul, during the Winter Games scheduled for Feb. 9-25, 2018. (Image: Shinsegae Food Inc.)

SEOUL, Jan. 29 (Korea Bizwire) – Shinsegae Food Inc., the food manufacturer of retail giant Shinsegae, said Monday it has earned a halal certificate for the cafeteria it will operate during next month’s Winter Olympics in South Korea, as part of its efforts to meet various demands of athletes from all across the globe.

Shinsegae Food said its halal food zone at the athletes’ village has received a certificate from the Korea Muslim Federation, a halal certification body recognized by Jakim, Malaysia’s Department of Islamic Development.

Shinsegae Food was tapped to provide meals for about 10,000 people, including athletes, administrators and operations personnel and the media for the 2018 PyeongChang Winter Olympics.

It has been preparing to launch the halal zone for Muslim participants, which account for about 5 percent of the total athletes who will visit the country next month.

The Winter Games are scheduled for Feb. 9-25 in PyeongChang, some 180 kilometers east of Seoul, and the adjacent sub-host cities of Gangneung and Jeongseon.